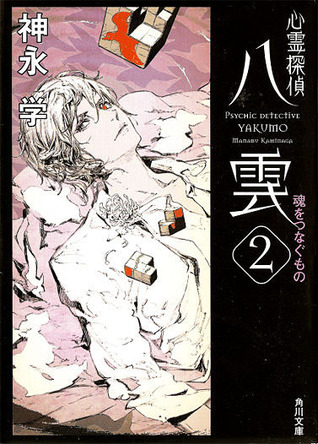 I decided to continue with this series. Hopefully all the books will be filled with backstory, with ghosts, hauntings and mysteries!

I loved the first little story. We find out more about Yakumo’s past, about how Gotou found him and what happened back then. I felt so sorry for Yakumo, no one deserves parents like that. It must have left a big scar, the fact that his own mother wanted to murder him. Wanted him dead. Saw him as a demon.

Second and official first story was really boring… Ishii was just plain annoying and too focussed on kissing his new boss’ ass. Bleh. I hate weak characters like that. Also why is he falling for Haruka? I am sorry, dude. Haruka is taken. She might not know it now, but Yakumo x Haruka is the only One True Couple here! Stop drooling and give up! Shoo! The story also wasn’t that fun, I really had to drag myself through it, which is a shame, I really loved the stories in the first one (ok, with the exception of the last one).
The whole serial killer thing was disturbing. And I think the main reason why I didn’t like the story was because it was just too much. We had someone named Mayuko seeing a ghost, then we have Makoto (which caused me confusing as Mayuko and Makoto’s names are so close, especially when one is tired), then we have a new character named Isshii, then we also have serial murders going on. Add to that the usual banter by Yakumo and Haruka and Yakumo and Gotou. It was just too much in one story.

It seems all the stories are connected. This was just too boring. :\ I really loved how the previous book had 3 different stories, with various creepy hauntings. This one had a few creepy things, but mostly it was disturbing.

Hata, or whatever the name is of the coroner, is disgusting. I really dislike him, and while I can understand why they keep him as a coroner, I wish they also would just fire him.

I skipped the parts about the autopsies. Sorry, I don’t need or want to know all that. Urgh, bleh!

The whodunnit was in the end disappointed. I already didn’t trust that person from the moment we first met him.

The ending and what happened there was awesome and fast-paced. Too bad it was too late for me to start liking the book by then.

I also wish we would find out more about Yakumo’s dad. It is getting a bit annoying that he is hinted and that he apparently has connections to stuff happening. There is a lot of foreshadowing, but for now it feels silly and stupid.

I really loved the epilogue. Good job Yakumo and Haruka. I hope that woman will be happy and cheerful soon again.

The translation was pretty decent this time, however it still felt a bit stiff and formal. A problem I often see with Japanese > English translations. Be them official or fanmade.