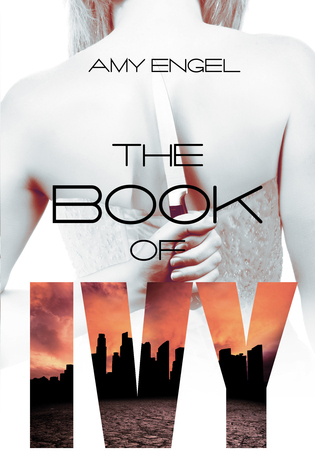 I was all excited about this book. I have posted a trailer reveal on my blog and I was really looking forward to this book.

It made me sad that I didn’t like it. I really had to push my way through the books, which came with lots of sighs, ranting and moans of urgh. Which drove my boyfriend crazy and also caused him to laugh and wonder why I was still reading it. Well, that is easy. Challenge. :\ I couldn’t just drop this one. If it wasn’t a book for a challenge, than I would have dropped it quite fast. Faster than the whole romance thing between Ivy and Bishop.

There were several things I didn’t like about this book. For instance the world-building. I liked the idea that the US was bombed and that there was a giant war thing that went on years before this book. (Again, what is up with all the US this and US that? What happened to Europe? Asia? Africa? Did they also get in problems? Or was it just the US? There are multiple times that they talk about what happened, but from what I could see there wasn’t a mention on who the enemy was. I am guessing Europe and all are gone too, as I would think that they would help out the US. Send help and food and such.)
However, after that it just gets weird. They survived, or well, the original group that formed the town did. And we know there were bandits before, but what about trade groups? What about other towns? Oh, don’t tell me that the world died. That is bull. I am sure there are more people, and I wonder why we never find out about them in this book. It would have been fun if there had been other groups, other towns that this town had contact with.
And that brings me to the town (or should it be city?) where this story takes place in. Throughout the whole book it feels like we are having a small settlement with some troubles (having to do with a fight/war between two factions long long ago). However, it is mentioned in the book (2 or 3 times I believe) that the town/city/whatever has around 10k people…. Where are these people? All hidden somewhere? Unimportant to the story?
Even when Ivy walks around, the book/author makes it seem like everything is easily reached and quite soon too. Which I wouldn’t entirely expect from a town/city/whatever with 10k people in them. Again, it felt all small town to me. Like everything was easily in reach, everything was close by and that there were hardly any people.
I also wonder who takes care of the fence. The government? The police/law inforcers? Someone else? I mean, it has been 50 years, that fence doesn’t take care of itself, it would need maintenance, especially since people get kicked out of the town/city/whatever and you don’t want them hopping back again.

The marriage part was fun, and I kind of liked the idea. Sure, I wasn’t up for the whole forced marriage thing, but I guess if it kept the peace in the town, it might be a good idea.
However, the whole marriage thing is getting a bit old. The book blurb makes it seem that it is about Ivy, who needs to kill the one she is forced to marry. But, a lot of the book is about the marriage thing and about Bishop x Ivy and less about the whole: “We have to murder him!”.

Ivy was a terrible character. Only near the ending of this book did I start to like her and cheer for her. Really, I know, I know, her dad and sister truly brainwashed her, but it just got annoying to see her have practically no will of her own and just do what her dad and sister said. While they weren’t even once nice or kind to her. They just force her, expected her to do stuff and when everything went wrong, Back to Ivy. I didn’t like her and how she acted with Bishop. I can imagine that you hate him, don’t want to like him, don’t want to be in this marriage. But come on, give the guy a chance. If anything, he has been a gentleman.
Ivy at times showed glimpses of intelligence, and I was hoping to see this come out more, but instead I was treated to an idiot.
I didn’t like how she had absolutely no filter, no matter who was in front of her, she spoke her mind. And while I like characters who speak their mind, I also appreciate timing and how things are said. With consideration and respect to others.

Bishop was the only character in this book that I absolutely adored! He was just wonderful. Sweet, kind, gentle and thoughtful. He never forced Ivy to do anything she didn’t want, and at the end he stuck with her and supported her. And the reason why he didn’t want to get married at age 18? That was just a dreamy reason.
If only Bishop had gotten a chance to talk, to show us his side of the story. To see his affection for Ivy, and to see how he thinks about this marriage stuff, to see what he thinks of his parents. I would have given the book more stars if Bishop had gotten a chance to talk.

I disliked the father and the sister. They are some messed up people. I get their reasons, but I don’t approve. I am sure there is another way. But they just are blind. They only want one thing, and they will shed blood to get it. Urgh, I hate characters like that.
And I also disliked that guy that got thrown out of the town/city/whatever. Dear Lord, I thought the dad and sister were bad, but this one gets a medal for being totally ewwww and what the hell?

The romance between Ivy x Bishop takes ages. Their first kiss? Their first feelings of affection (well at least from Ivy)? Near the end of the book. :\ By then I couldn’t even care any more. Oh, you are adding romance now? *laughs*Yeah, nope. Not interested. Especially as the speed picks up after that, making it highly unrealistic. Nope, just nope.

Well, this review turned out to be quite huge. Sorry for that. 🙂
Will I be reading the second book? Well, I am thinking about it, especially since I kind of liked the Ivy we got near the end. And I am hoping for more world stuff. But, the moment the second book turns crap, I am dumping it. I got enough books to read after all.