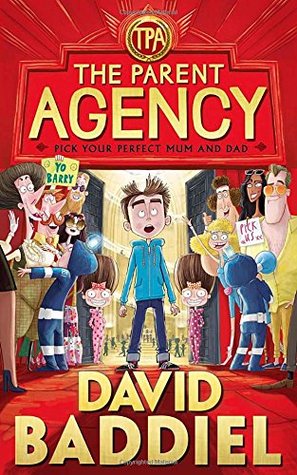 My 3-star rating has mostly to do with our main character. Other than that the book was really interesting and I like the idea of a Parent Agency.

Let’s start with the main character. I just didn’t like him. I found him whiny and pathetic. Never once thinking about his parents. They did their best for him and his siblings, but they just didn’t have a lot of money and thus they had to say no to him. But yet he kept complaining and whining and acting all mean towards his sisters and his parents.
Luckily, he changes a bit throughout the book. Learning that having money, or fame or anything else he had on his list isn’t everything. I was worried he would be happy and delighted to find a world where he can ask for any parent and that he would just forget all about his parents. Thankfully, this doesn’t happen.

I really liked the various days/parents. They were all hilarious, though I wonder how they ever would get to be parents. Especially the rich and famous pairs were just a bit too much.

I loved the world that our main character lands in. I found it really interesting that there would be a world where kids pick their own parents. Where there is an agency that handles all the applications and that such an agency is run fully by kids.

I loved the little twist near the end. I didn’t see that coming, so I was happily surprised.

All in all, I would still recommend the book, even though the main character might annoy you at times.