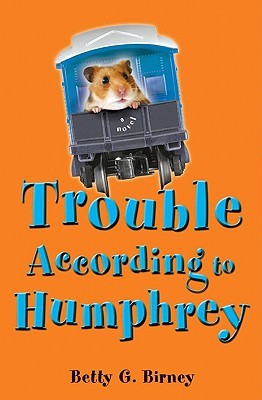 A new part in the Humphrey series, too bad it wasn’t that good. This lay mostly in fault with Humphrey and also the humans surrounding him.

For instance, I didn’t like Humphrey much in this book, because he kept whining and putting himself down because he made 1 little mistake. If this got solved fast I wouldn’t have minded, it would have given Humphrey some more depth. However, the problem wasn’t solved until near the end of the book. So we constantly had to hear Humphrey degrade himself. Thinking he was rat, bringing it up every time he could.
Normally I love Humphrey, but now he was just annoying me.

I also didn’t like how Mrs. Brisbane just jumped to conclusions and that it took her the whole book to find out about it and apologize. It was just frustrating.

And then we have that woman that is saying Humphrey made her kids sick. Seriously, some people. *shakes head*

Then there was also the whole blurb thing that was pretty much a lie. I expect my blurbs/backcover parts to be about early things happening in the book. However, the thing on the backcover for my version didn’t take place until page 112. And we only have 164 pages. In the end the whole hype I had, whittled down to almost nothing and then the problem was also solved pretty easily. Which, sure, was to be expected from the fact this is a children’s book.
But I will still remove points for this. I was looking forward to a whole book about said problem, about said possible lawsuit and then find out it was near then end. :\

I really liked the class project this time. Making a community/village named after their classroom hamster. It was great fun to read about the kids making parks, statues, schools, houses and more. They thought about names, they had jobs (which didn’t always go correctly). It makes me wish I could be in that class. It sounds great. Too bad I am too old to go to elementary/middle school.

The cover is once again super cute and I was delighted when we find out why Humphrey is on a train on the cover. Yay, for Humphrey!