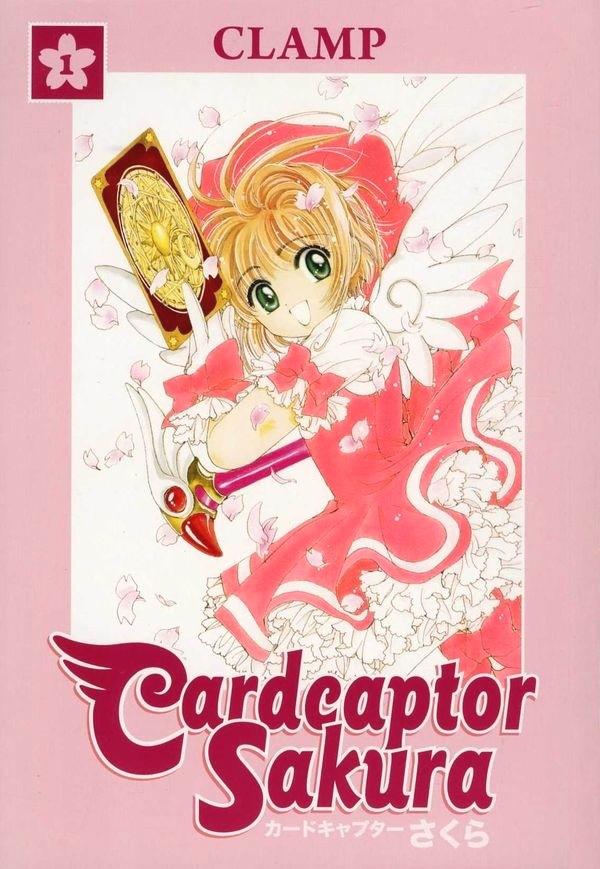 I decided to re-read this omnibus/manga series, as I wanted to also review it. This time I want to write a longer review than I did back in the days when I just started with reviews.

This new omnibus comes with a whole bunch of colour illustrations. These can be found throughout the book, at the start, when there is a new volume part and even at the end we have 15 beautiful illustrations.

This omnibus combines volumes 1 to 3, and I am really happy that they did this, instead of splitting it up in 6 parts (since the manga has 12 volumes in total). The only thing that is a problem is that due to the 3 in 1 thing, the book is quite chunky and at times not easy to hold or to read.

Now to the story/characters.

Sakura is still as cute as she always is. She is a smart, energetic girl, and she is quite responsible and cares a lot about her family and her friends. In these 3 volumes we get to known her, we find out about her family (and about her mom), we slowly find out about her powers (since, no, while she is powerful and very magical, her powers are still growing and are still not showing them all). It is really fun to see Sakura grow. From at times insecure with the Clow card capturing, to a more daring and brave girl who doesn’t mind getting close or figure out how to capture a Clow card.
I love how she acts around Yukito. I know the first time I read it (and saw the anime), I found it a bit awkward, but by now after re-reading this series a few times and watching the anime twice, I know why she is so in love with Yukito, and I can’t wait to read about that revelation again.
The antics between Touya and Sakura are just hilarious. He is always teasing her and she is always reacting to it.
And I like how oblivious she is to stuff at times. It makes for some hilarious scenes.

Syaoran, urgh, I so disliked him in these first volumes. He was pretentious, thought he knew everything better and he tried everything to steal the affection of Yukito (also for him, when I first read/saw this happening, I thought it was a bit creepy, but we later find out why he is so obsessed).
But, I can slowly see that he is starting to change. He tried to help and protect Sakura, and they are really cute together. Though I think it will take some more volumes for him to be truly nice to her. Now, he is still trying to also capture the cards, not caring that Sakura might be hurt if he does this.

Touya and Yukito are wonderful characters, and I love seeing them together. I won’t spoil much, but let’s just say I am cheering for them. 🙂

A bit on Touya again, I don’t really like how he bullies his sister at times. I know, he is just being funny and he really cares about her, but it just annoyed me at times.

Tomoyo is a cute character, though at times a bit stalkerish and at times a bit creepy, she is a great friend and she cares a lot about Sakura. In this manga omnibus we find out that she really really likes Sakura. Just like a certain mom liked a certain other girl. 😉
I love how she can make outfits that match with each Clow card or situation. I wish I could make clothes like that, I can make clothes, but not as magical as those that Tomoyo creates.

There is only one thing I didn’t particularly like. The relationship between Rika and Terada-sensei. Maybe it is because I am from Europe where this is just something that is not done, but I found it quite creepy that a 10-year old and a 30-ish teacher are in a relationship. Sorry, that just creeps me out. And yes, it is typical CLAMP to have such a controversial relationship, but still. shivers

The story is great and I really love how it goes from slice of life with some magic, to more serious stuff. Of course, there is still enough fluff and slice of life, but near the end of this omnibus you could feel stuff switching, changing to something maybe a bit more darker.

Oh, and I love the little side introductions we get at times. They show us a picture of the character and tell us little facts. Such as birthday, clubs, favourite colours and various other things. Thanks for adding this!

The illustrations are perfect, I really love CLAMP’s art (it is one of the reasons why I am such a fan of them). The Clow cards are beautifully drawn, and I like all the little details they put into the manga.

All in all, I would really recommend this omnibus/manga to everyone!