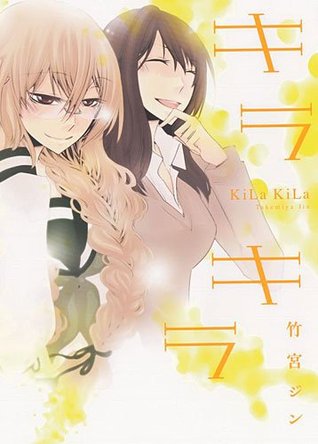 This one was very adorable, but I had expected something a bit more different.

For instance, I thought we had more couples. Instead we have 2 couples. We start of with one couple, then we get 3 chapters of the other, and then end again with that first couple.

I really loved the first couple. They were cute and while I didn’t particularly like Saya (since her reasons to befriend Mari weren’t nice or pure), but later I saw that those reasons disappeared and she found something different. I was sad to see that Ria wasn’t who she appeared to be. I was looking forward to see her, but then she turned out to be a girl who has a too big ego and a mean streak.
The first chapter is from Saya’s POV, but the second one is from Mari’s POV. It was a bit confusing, but soon I was delighted that they did it this way. It made the story even more awesome. Now we can see what Mari thinks about all of this. And we also get a closer look at her sister.

The second couple, well I just didn’t like them. I felt sorry for Youko-chan. Sure, she might have had a bit more tact when she said stuff to Nana about her sister, however, I feel that Nana also overreacted. Nana was just a horrendous character, falling for someone because of that onee-sama thing, and then not seeing the little signs that something is not right.
The second part was the part where I totally hated her and her attitude. I can imagine that she said what she said, but come on, a bit more tact please?
The last part is from Nana’s POV and it seems that quite a few years have passed. Nana really feels guilty about what she said, what she did, but she quickly find out that too many years have passed, that she is too late, too late to change anything. It was a sad part, but I just didn’t care about Nana. I think she deserved all she got. She had a shot at love, at happiness, and she shot it down.

The art is gorgeous and I really love how the characters are drawn. Especially the eyes are very nicely done.

All in all, I would recommend this manga to everyone seeking a nice Shoujo-ai Manga.