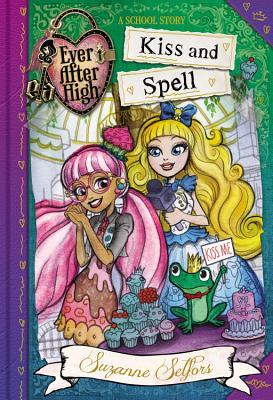 A new part in this series and with a new main character.

This time we meet with Ginger, the daughter of the Candy Witch. Yes, ladies and gentlemen, that Candy Witch from Hansel and Gretel. But as we know, in this series most of the stories are quite the same, but there are some differences. For instance, The Candy Witch doesn’t even eat children. Apparently Hansel and Gretel were a couple of annoying, f-you, we-don’t-care and lying kids. The other things match, the Candy Witch makes candy, she likes poisoning people (she needs guinea pigs for her tests after all, and since no one is volunteering (gee, how come?)). I really like this twist that she is actually not that bad, I was already kind of hoping for it.

Only thanks to all that Hansel and Gretel stuff, everyone now thinks that the Candy Witch is bad (like worse than bad), and this also causes trouble for her daughter. The poor thing is shunned by people, she had quite a past of people running away from her or her mother. I just felt so sorry for her, and I could understand why she was trying so hard to change things. To show that she wasn’t like her mom, and to show them that her mom could also look normal (with a lot of effort, I must say).

It is something typical from this series, you feel sorry for the characters that should be evil, or have evil in their blood. Most of these kids don’t want to be bad, they actually want to do something else, they want to live their lives as they want, not dictated because of what a story tells them. With each passing book, I just feel more and more sympathy for the Rebels and the ones with a story that forces them to become bad.

I loved Ginger, she was a great character, though I wish she would speak up a bit more. She is quite silent, even though she is so outgoing on other fronts. I would have loved to see some illustrations, as I love the descriptions of her dress and how she dresses. I wouldn’t mind a dress that looks like a cake or something delicious.
Her crush on insert character name is so adorable and I was just hoping things would turn out to be good for her, she deserves happiness.
The show she was hosting was interesting, though I can kind of understand why people wouldn’t want to watch, with so many other options a cooking show can be missed, and maybe people are just not that interested in cookies and cakes. I loved how she fought to get the show to stay, how she tried newer things, and found out a way to keep her show forever.
She grows in this book, from a timid mouse with a love for cooking, to someone who is more open and also more happy, but also has more respect for her mother.

I loved the Candy Witch, it was great fun to see her appear in this book, and while she was quite evil, I could also sense that she only became really evil was because everyone in her family was that. And that by now she just doesn’t know better. It is quite sad and shows once again that destiny is fun and all, but not for those characters that might not want to be evil, or might be totally different if they had had a chance to look at other options.

Blondie just keeps getting better. At times I was annoyed with her and how she acted (she is so nosy), but at other times she was a terrific friend who helped out the best she could.

Of course we also see the various other characters that we already met in the previous books. I didn’t particularly like Briar in this one, she was snobby and a bitch.

I still really like the world building in this one, and at times I would love to take a peek at this world and enjoy a (school) day in this weird and wonderful world. I am sure they got some great and wickedly fun lessons that you normally won’t find in a normal school. And I am sure I could lose several hours just exploring the world they are in.

The ending to this story was great, I really enjoyed it.

All in all, I would recommend this book. It is a fun book if you like Fairy Tales, boarding school and a spotlight on a new character each time.