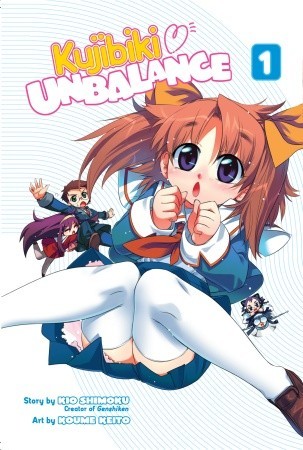 Read this one some years ago, and decided to read it again. 🙂

It was a fun volume and I really liked it, however I don’t think I liked it as much as I did the first time. It was just too much at times, and yes, I get that is the point of this manga, to be over the top, to be silly at all times. But it is just not something I want all the time any more.
But there is also story and backstory and I will keep on reading this one (there is only one volume left after all).

The characters are decent. I didn’t like all of them. For instance the current student council, they are cold and harsh (probably for reasons), the new student council is weird (Renko just annoys me). Chihiro needs to man up and get a bit tougher, he is so weak and bleh at times. Sure, he also shows that he will protect his friends, but he is just a bit too boring and his bad luck is just so cliché.

Then we have the fanservice. There is quite a lot of pantsu shots, but also nakedness (why is everything censored but the nipples?). I don’t mind fanservice, but it was just annoying me here. It was totally unnecessary.

It was fun to see that things are decided by Kujibiki. It is an interesting system, though I can also see why it might be a bad system. For instance the whole club stuff and how that is done.

The art is pretty good, though the characters eyes are just creepy.

I loved the last part where we come back to the Genshiken clubroom. It was fun to see them talk about the Kujibiki world, about the mangaka and also see them discuss stuff.

All in all, would I recommend this one? Yes, and no. Yes, if you are searching for over the top stuff and don’t mind fanservice. No, if you don’t like those things. I think people who read Genshiken might just appreciate this manga (and also the anime) more, since it is a thing that runs through the Genshiken manga.