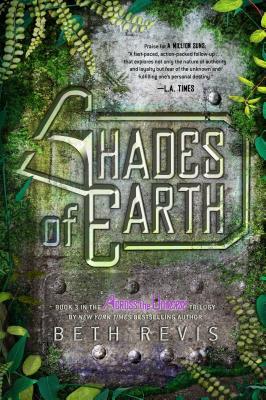 All series must come to an end, and this one ended with a bang! Of course, not all of the series was that good (there were some parts that just seemed to go on and on), it is a reason why I rated this and the other books with 4 instead of 5 stars.

In this book we are off the ship (Godspeed) and on our new planet. A planet that indeed is filled with monsters and other things that might just kill people. Slowly, but surely things are unravelled and while some of the things didn’t come as a surprise, some sure did. I won’t spoil anything, and that is also the reason why I am keeping this review shortish.

I didn’t particularly like Amy’s dad. I know he was in charge and probably protecting his family, but he was just a dick for a lot of the book. If only he had listened to Amy, or to Elder, I think quite a bit could have been prevented. But no, he treated Elder as a child and Amy was just his daughter, his little princess. It doesn’t matter that she went through 3 months of stuff. 3 months with traumatizing events happening, it doesn’t matter she has grown up and might know more about stuff that will help with the mission at hand. Her dad’s will is what must be obeyed.
I also didn’t like how he was distrustful of the shipborns, how he treated them just like some people do/did when they see someone of a different race or colour. I just felt sick at his prejudices. And not only him, but also most of the other Earthborns. Not caring to learn their names, or learning about them. No, no, let’s not talk to these strange people. *rolls eyes*

Amy was great, I really loved her in this book, though I also felt so sorry for her with all that happened to her in this book. No one deserves that.
I also didn’t like how she acted around Chris. I know, I know, but still, it felt weird and awkward and it made me worried.

Elder was good, but I didn’t always like him. Like with previous books, he just felt weird and there was just something that I didn’t particularly like. Still he is a hero with everything he did in the book. He sacrificed so much, did so much. All for his people. That takes guts.

I loved the reactions of the Shipborns to various things. Like rain, or seeing the sky, or finding out that there are no walls. Nothing to hold them, nothing to restrict them.

Amy x Elder reaches a new point in this book, something I was kind of hoping for since the second book.

This book is packed with action, excitement, but also beware tears and drama. A lot happens and the ending was just perfection. I was so worried we might end a certain way, but thankfully that didn’t happen.

All in all, I would recommend this series to everyone. It has romance, spaceships, drama and a whole lot more!