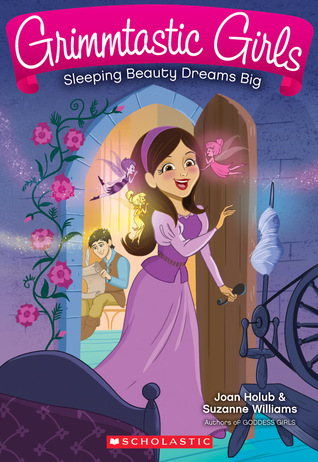 I was delighted when I finally found this book. Now the story can continue, but now not from one of the main characters, but instead by a brand-new character named Rose.

I would also recommend that people read these books in the order as they came out. If you would only read this book you would be very confused. They do tell us what happened in the previous batch of books, but it is quite limited and you would really need to have read the other books. Not only for the story, but also to find out about the 4 girls mentioned in this book.

In this book we have a new character named Rose, also known as Briar Rose and also known as Sleeping Beauty. I really liked the girl. She is a dare-devil, not shying away from anything scary or dangerous. Which is logical. If you have been treated like fragile for most of your life, and have been prepared for a life of not touching anything that might prick you, anyone would turn to do some fun things before that happens. I loved that Rose wanted to be a knight, wanted to do jousting! It doesn’t happen often that we have a girl who wants to be knight, who doesn’t shy away from doing dangerous stuff.

Of course there is the clichéd finding your prince, fulfilling your destiny stuff, which just made me roll my eyes a bit. Also I found it weird that our 4 from the other book didn’t believe Rose at first. They were there when things were changed, yet they didn’t believe her about the changes happening to something of hers. It was just a bit weird and I found it stupid that it was added. Way to discredit the characters from the previous book.

In a way the book felt like it took place over a few weeks, while in actuality it took place in 4 to 5 days. It was a bit weird, but it also made me happy. I don’t think I could stand a few weeks of Rose being on edge because of her curse, the 5 days were long enough for that drama.

As expected, we have the whole E.V.I.L thing going on (not that that is going to stop any time soon I guess). This time they got a new plan, and it was quite interesting to see the plan. I am still a bit confused though, why does the principal let these people work for him in the school? They are known to be bad and all that, but they can still work and thus destroy stuff in the process? Maybe he doesn’t know, or maybe he cares more about his gold than about firing teachers that are potentially up to no good.

The ending was a bit predictable, but still fun to read. I won’t spoil anything though, so you will have to read it to find out what happens. 🙂

All in all, I really liked this book and I can’t wait until book #6 comes out, I will be sure to read it when I can find it.