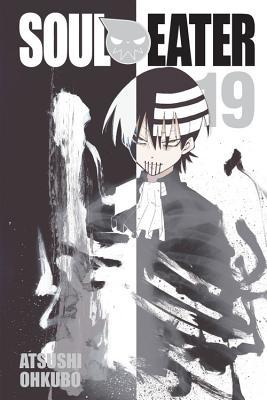 I decided to put these 3 together as they mostly form one arc. And wow, what an arc it was. We got teleportation to the Eibon book, a big battle to save Kid, and then the battle against Noah.

I loved the whole Eibon book part. It was just hilariously funny to see them go through the seven sins, of course it wasn’t always funny. Not when Maka and Soul got into the book of Envy and then Sloth. But those 2 chapters also did something, they brought these two closer together. Closer than they already were. Soul is a terrific character, even when Maka is saying all these things, even when she can’t fight, he will fight, he will try to get through her and try to make her understand that he only wants one Meister, her. And no one else.
Maka is also growing as a character, and also showing us a side that she doesn’t show often. A side that is worried, a side that wonders if she is good enough for Soul, or if he should find a new Meister. It gives more dimensions to the Maka we already know, and I also just wanted to hug her and tell her everything will be fine. That she shouldn’t listen to those dreadful people who are hurting her, telling her she isn’t good enough.

My favourite parts would be when they got into the lust chapter and all genderswapped. Maka just looked the same (though she was bleeding over an enemy with big boobs, which is funny as she is normally all angry and fussy about guys liking big boobs), Soul was a prissy princess, Black Star…. well let’s just say he loved his new boobs. Blair was the best one of them all. She changed into a very very hot hunk. Which caused Kilik to swoon (and yes, Kilik is a guy who turned into a girl in this chapter). It was hilarious!
Then we got the whole parts about who will turn normal last, as that meant that the person who was last would have the most lust/sin. It was great to see them try to get to change faster, as they didn’t want to be know as the horny ones.

The battle between Kid and Black Star was great. Madness infused Kid was spectacularly awesome and I really loved it, though I also wished Kid would turn normal.

The last battle was a bit weird. But still very great and I really enjoyed it, though I felt it was a bit short, too fast. Most battles take some time, but with Noah not so. Though considering everything that happened, I have a big suspicion he might be back. Of course I am not hoping this, but knowing how people tend to get back….

The art is pretty great again, during the times of madness or when things go wrong the art distorts and shows us the madness of it all.

All in all, I would highly recommend these 3 volumes. And me? I can’t wait to get the last 6 volumes and read them. I am kind of sad the manga is almost ending, but luckily I still got the anime to look forward to after all this.