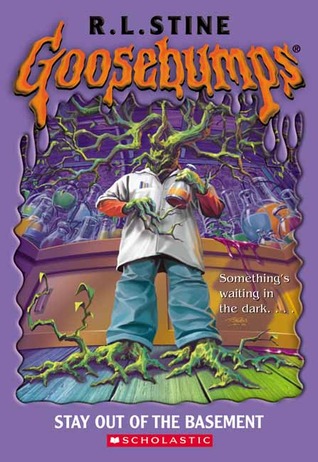 Not sure what to think of it, it had some scaryish parts, but mostly it was predictable and the ending is so typical R.L. Stine.

I couldn’t find a normal version in my library, so I read the one with all the dictionary definitions. Which made me just laugh at times I probably should be afraid or scared. There were also images with what the items were at times. The images were at times creepy, but most just made me laugh, because of the words and the arrows pointing to the items.

The story was so-so. I was bored for most of the book, and knew what was happening long before the ending popped up. Maybe, just maybe, I am getting too old for these stories and maybe it is just the story that is too predictable and easily figured out.

The main character and her brother were decent, I didn’t particularly like how they didn’t seem to understand listening to stuff. I know, they were curious and they wanted to help out, but it kind of annoyed me that they never listened. Not once. It makes me wonder how they are normally, with no scary things in the basement.
Of course they were also brave, and they tried their best to find out what happened to their dad, why he changed so much, and what is going on in the basement.

The actual ending? It was decent, and I was kind of excited to see what the kids would do, what choice they would make and also would it be the right one? I am still not entirely sure if they picked the right person or not, especially with that ending. A typical R.L. Stine ending which just ends it with a twist. I don’t mind twists but these books are standalones and it just annoys me that we will just have to think up the ending for ourselves, sometimes I just want the ending without having to think about stuff, without pondering about it.

Would I recommend this book? Meh, not really. It had some parts that were fun, but mostly it was just a bit too boring and a bit too predictable. Also that ending was just annoying.