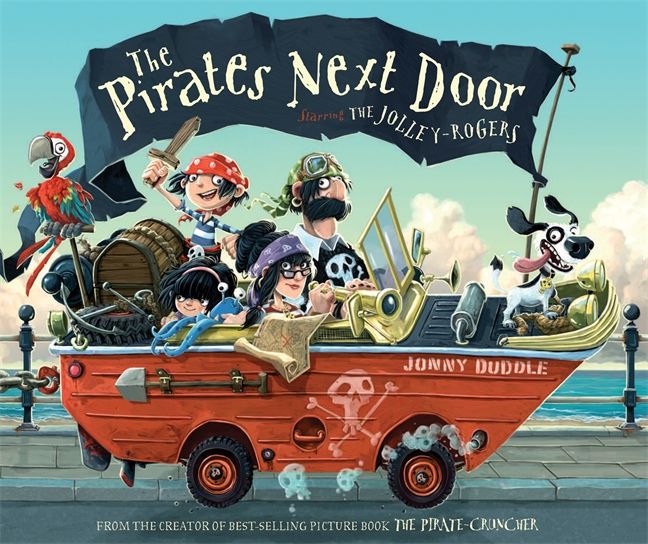 A fun book about a boring little village with strict rules and what happens when pirates drop their anchors and decide to live there for a little while.

I really liked our main character. A little girl, but with a big love for adventure and for fun. She doesn’t mind the pirates (and is the only one in the whole village), she finds them fun, especially their son who is her age. I wish we could have seen some more illustrations of the the two kids bonding and forging a friendship, maybe even adventuring. I would also have liked to see some more of the Pirate family. While we did see some thing, mostly it was about the fact that the pirates were disturbing people. People wanted them gone.

And that was why the book was at times a bit boring. The constant: “Oh noooesss, pirates, we have to get rid of them.” shtick just got bleh. I wish people could have seen that they weren’t that bad. That they didn’t intend to do much harm (not to humans at least).

The last few pages were a disappointment, especially with the clichéd reaction of the adults when stuff happens. It doesn’t really show a good message to kids. Like, Oh hey, you can be bad, but you can bribe people to like you. I know, I know it is a kids book, but generally kids books have messages and generally they tend to be all goody-two-shoes kind of messages. Not the other way around.

The illustrations were gorgeous and I loved that instead of one big picture, or 2 big pictures, we had several pictures forming a story. We even have a fold-out part which is pretty gorgeous.

I do hope we will have more books about this pirate family. I love how they brought their ship with them (like one would bring a speed boat or a smaller boat).

Would I recommend the book? Yes, even with its faults it was a good and interesting book and I had fun reading it.

2 thoughts on “Review for The Pirates Next Door”