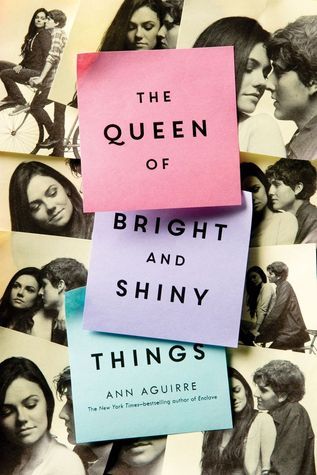 This was a a wonderful, great book, I am really delighted I read it. I haven’t had a lot of luck with the newest books that have been coming out.

The main character is a very great girl, however I didn’t always like her. Sure, it was nice of her to be so friendly with Shane, but I felt that she did too much at times. I know her feelings about him, but to me at times it felt more like she treated him like an abandoned puppy. Luckily, she tries her best to change that, asking permission and trying to let Shane do stuff on his own. And after that her and Shane’s relationship feels more and more real.
I was all curious as to what the thing was that happened to her, she keeps talking about having a dark side in her, a side she keeps locked, but with difficulty at times. I was hoping it wasn’t something stupid (I have read enough books were this happened, book would build excitement and we would find out that the girl just did something wrong on her own and got punishment for this), and thank Lord, it turned out to be a real problem. I know, this might sound wrong, as the problem was so sad, so heartbreaking, but it just makes me happy it wasn’t some silly excuse or some silly problem.
I loved how she tried to live her life, I loved how she tried to cheer up people by way of posting notes to their lockers. I really liked how she tried to stay positive, even with the heavy load she carried and all the worries she had about her aunt and her stay with her. At times I just wanted to hug her, especially when we found out what happened to her in the past.

Shane was a great character, at times I found him a bit too meh or too emo, but then I found out that he was wonderful, that he too had a big secret, he too didn’t have the easiest life. Like with Sage, I won’t spoil what the secrets are, people will have to find out themselves.
I loved how he tried to survive, tried to continue and I loved how with Sage he became more happy and more relax in life. Finding his way in his music, daring to show it to others. I can see he will have a good future in music if he chooses to pursue it.
I loved how Shane grew throughout the book, how he opened his eyes and saw this beautiful world, just waiting to be explored. Most of this was thanks to Sage, who kept holding him and loving him. Who kept showing him the wonders of the world. Showing him that people can be ok, that people will fight for you.

A small mention to a great girl character, Lila. I really loved that girl. She kicked ass, but like with Shane and Sage, she also had things that happened to her. It wasn’t as big or monumental as Sage or Shane, but I think it still counts and I think no girl should be treated like this. I loved how smart she was, how she was with Sage.

Shane and Sage’s relationship was one to swoon over. These two really are soul mates, are really meant to be together. I loved how they instantly felt comfortable with each other, how they each protected the other, tried to help out the other. Their love was just perfect.

There are some other characters. I didn’t like all of them. I didn’t like Sage’s friend (for big reasons, read the book to find out), I liked him at first though, but after that revelation? After what he did? Sorry, no. No.
Then we have the jock guy. Another stereo type or another situation that I see happening in books. The jocks do all kinds of bad stuff, but never get punished. Though in most books they do get punished eventually due something huge happening that no one can deny. That no one can hide. Sure, Sage also had a part in this situation that came forth from the battle between her and a certain jock, but I think this guy is worse. Doing this? It was just disgusting and I think he should spend his time studying instead of digging up dirt that should have stayed on the ground.

Unlike a lot of books this book doesn’t immediately tell us what happened to Sage, or to Shane. It tells it to us slowly, building up for that big finale, building up to the end. Of course, there are enough hints, there is enough story to tell us in little doses or at least allow us to think about it. I really appreciate it when books don’t immediately dish us the whole story.
And when we found out the whole stories on both characters? I was sad, I wanted to cry for Sage, for Shane. That poor Sage. No one deserves that happening to them.

There were 2 things I didn’t particularly like or that I found exaggerated.
1. The fact that Sage got on her bike and cycled like 5 hours to get to someone, and then also cycled 5 hours back. Sorry, this is highly unlikely and I don’t see anyone doing this. It just destroyed the realism the book had. And yes, I know the book is fiction, and anything is possible. But with such a real topic, I don’t think her cycling 10 hours in total is realistic or normal.
2. Her constant: I don’t do cars-shtick. We are reminded about it every x number of pages and I just got annoyed with it. Instead of thinking that it was pretty brave of her, I just wanted to push her in a car and drive a few kilometres. I can understand she wants to save the world, but carpooling isn’t bad. Just get one car and fill up with people who also need a ride to school or to whatever place you want to go. It just got on my nerves so much that she kept saying it, regardless of the situation.

All in all, I really enjoyed this book and I didn’t want it to end. I would highly recommend this book to everyone! And me? I can’t wait until the paperback comes out so I can add this book to my collection.