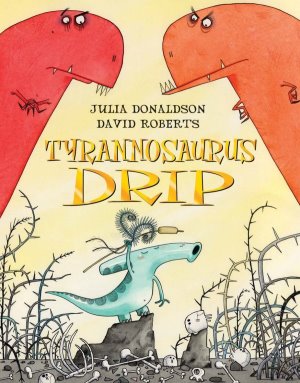 I had expected something totally different from this book.

I can’t say what, as that would spoil the book, and for such a short review I don’t feel like spoiler-tagging stuff. I was hoping for one ending, but I got a totally weird and not even close to what I wanted ending. An ending I didn’t see coming.

I also had expected something to happen when our little dinosaur found his real family.
I had a lot of expectations and none of them were met. The book was mostly boring, T-rexes are angry, carnivorous dinosaurs and nothing will change them from that. The Duckbill dinosaurs were just boring and didn’t do much. They only cared for water and eating weeds, nothing more. At one point I was even cheering for the T-rexes, because at least they showed emotion and had a goal.

The little Duckbill was interesting, but I found him a bit too boring and too easily seen as some kind of hero.

The chanting got a bit boring, one time or two times is nice, but almost every other page with the chanting? No, no thank you.

The art was really nice and that is why this book gets a 3 stars instead of the planned 2 stars.