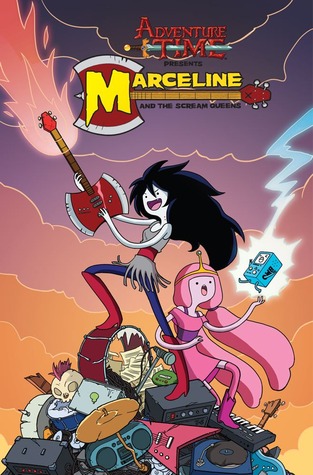 I am new to the whole Adventure Time World. A few days ago I read Pixel Princesses and hated it, and I have seen some gifs/images on the internet about the show. Other than that, never had an interest to check out the show.

But I have to say this graphic novel/comic was pretty awesome. Marceline and Princess Bubblegum are really fun characters, and the rest of the band also seems awesome. I really loved the parts with the band and them travelling around. Marceline finding about reviews. Bubblegum trying to manage the band (and it not working out always). However the parts that we switched back to Bubblegum’s country I just got confused. I knew the characters Jake and Finn, from images/gifs on the net, but it stopped there. So imagine my confusion when I saw Finn without his outfit. I was like, hold on who is that dude? OMG? That is the same dude as that guy who is always in a strange outfit? And why did Bubblegum make Jake temporary king? He doesn’t seem like the greatest character to make king. Unless he is a great character for it and I just don’t know it because I haven’t seen the show.

The only thing I didn’t like about Marceline was her attitude and how she acts at times. Yes, bad reviews suck, but live with it. Don’t just drop away from a concert or continue to pout endlessly or do all the other stuff she did. It just got a bit lame that she kept running away, instead of just kicking ass and thinking that haters will be just that, haters. Nothing more. That she has enough fans who love her and who can’t wait to see her.

Guy and what he was just got to be some sort of joke. Instead of finding him great (as I did when we first found out about him), I slowly started disliking him, and at the part where he confessed, I was just like: Oh, yes, now you say that, but I dare to bet that in a few pages you will confess you are actually something totally different. rolls eyes

I didn’t read all the side-stories that were included in the chapters. Mostly because they featured characters I never heard of or characters that I didn’t know that much that I could enjoy the chapters.

The ending to this volume was really awesome and I was just cheering for Marceline and Bubblegum. We come across Lump Princess (since it looks exactly like the character from Pixel Princess) and dear Lord, it is a bitch again. Seriously, can we just burn that character to hell? Where it belongs? I was so hoping that we wouldn’t encounter it in this book.

The art was awesome and I really loved it. It is so vibrant, so much fun, it just felt like it could leap out of the pages and form a party in the real life. 🙂

I hope there will be more Marceline volumes/chapters coming out someday. She really grew in this one, and I really like her character.

Would I recommend this graphic novel/comic to people? Yes, yes I would.