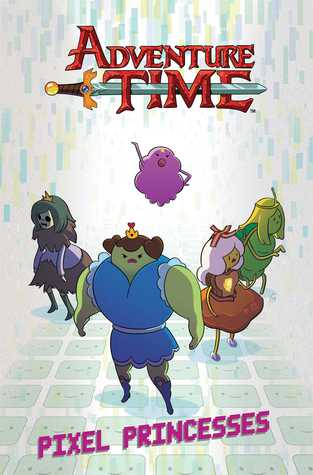 I seem to be in a minority here, but I just didn’t like this book. Quite a few of the characters were either non-existent or horrendous, the story was interesting, but I think BMO should really be getting some sort of punishment for what he did, and that he forced them to continue, even threatening them one time.

And I was really looking forward to it. Princesses? Adventures? Battles? It all sounded really awesome, too bad it was apparently not meant to be. 🙁

I also didn’t like that this one was in black & white, I had expected it to be in colour, and I think the book would have been better if it had been in colour. It would have given a bit more spark and a lot more fun. Now it felt a bit bland and boring at times.

I truly hated Lumpy Space Princess, and even though at the end she kind of redeemed herself, for most of the book she was a terrible, shitty, whiny, bratty little bitch princess, who never cared or took time to look around, bringing the party to dangerous situations. Sadly, she took quite a bit of the stage in this book, and I just wanted to erase her from the book.

Turtle Princess was just boring and at times I just forgot she was there. She also whines and is enormously depressing the times that she is doing something special.

Embryo Princess, wth is up with that? It was just disturbing and disgusting to see some kind of embryo/baby thing floating around naked. I am not even sure why this was considered a good idea or if they thought people would find it hilarious. I don’t see anything hilarious/funny about a naked embryo/baby.

Breakfast Princess, I just loved her. She was kick-ass, she thought about things thoroughly, tried to keep the group together and tried to get out of things in the correct way. I was happy to see her getting pissed off with LSP, about time someone spoke up about LSP’s horrendous behaviour. All in all, she was the only character I truly and really liked.

The other 2 princesses, Muscle Princess and one I forgot the name of, they were decent, but I feel like if they weren’t in the story, we wouldn’t really miss them.

BMO was another character that I truly disliked so much. He or she, or whatever it was, was just a whiny little brat. Demanding to become a princess. You don’t do that stuff you did to the people you consider friends/acquaintances.

The ending was kind of cute, and there were also a few moments that I laughed aloud (like the bunnies/cute animals part or the Canadian Maple Syrup part), but these times were few and thus I can’t rate this book higher than a 1 star. At times I just was dragging myself through the book, hoping it would get better, but every time I looked at the page stats and would see I was still far from completing it, I would sigh. It is a short book, but it felt I took an eternity to finish this.

Would I recommend this one? No, I would not.