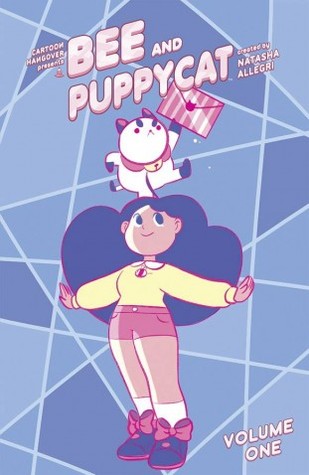 Just as a note: I never heard, or seen the Bee and Puppycat cartoon/youtube videos/whatever. I just saw this graphic novel/comic while searching for new ones, and I loved the art and the description. After this, I might check them out, as I am highly confused about stuff happening in this one.

Because, yes, like I have noticed quite a few times lately with comics, you just get thrown in head first and then told to have fun. I still have fun, but I am getting tired of the silent requirement to just instantly get what the hell is going on. This comic is no different. We are thrown head first in the world of Bee and Puppycat. We get some vague explanation on what the hell is going on and why Bee is working as a magic worker, but not that much. It also doesn’t help that the stories feel very much like something that also happens in anime at times, which is something called Monster of the Week. One job ends, and the next one pops up in the new chapter. There is not much story in-between, nothing to tell us more about Bee and her backstory, or about Puppycat and his/her backstory.
It also doesn’t help that there are various stories happening.

Because that is what happens. We have several stories going on, which is quit a bit confusing. I could see the difference by the title and by the different art style, but it still threw me off, I wish they had kept to one story only. Especially to people who are new to Bee and Puppycat, it would just have been easier to have one art style and one story. I think they could also have explained then how the world of Bee worked.

On the whole Magic Girl stuff? I had expected something more, especially since they mentioned Sailor Moon and Madoka. Let me just tell you this. No, it is nothing like that. Not at all. It does come close to the Powerpuff Girls, but that is really all. I haven’t seen her use much magic (if any would really count as that). It is a bit of a shame, I was really looking forward to it, as I love the genre.

Bee seems like a nice character, though she really whines and complains a lot. She is also really lazy and seems not much in the mood for anything. Which is a shame. She has the power (well…. that bot thing does) to do great things, but she seems not that much interested in it.

Those QR code thingies in chapter 2 are nice, but kind of worthless when you are on a tablet and have no other means of reading those things. :\ I guess I will keep the chapter in mind and ask a friend to read them for me. Since I am still curious as to what those things say.

The art styles are great, though I preferred the one we also see on the cover. It is really pretty and soft, the colours match with the style and I enjoyed looking at it. The other art was often hit and miss. At times it looked good, but sometimes it just looked off and weird.

The last chapter/volume thing of this one was quite a disappointment, the other 3 were fun/interesting, but the last one? I am not sure what happened there.

All in all, I can’t rate this book more than 2 stars. It had its good moments, but also enough confusing and boring moments.