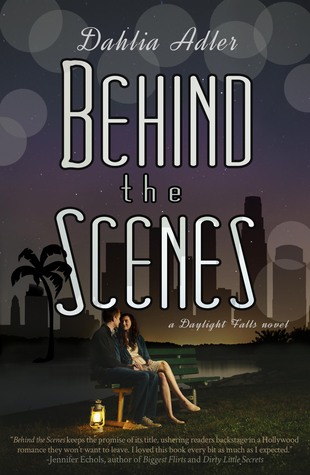 This was a great book and just what I was looking for. It has fluff, romance, drama and Hollywood! Add to that mix great(well mostly great) characters and fun situations.

Our main character was really cute, but at times I was annoyed with how she thought about things. The whole Liam x Vanessa stuff. I wish she would have been just honest about it, instead of letting things spiral out of control like the way they did. But yeah, I guess if the author had done that, that book wouldn’t have had the drama or the whole learning process.
I loved how our main character was with her family, how she tried to make her own money so she could go to college. I loved that she just didn’t accept the money, but instead wanted to work for it, hard, and I was so proud of her. Not many people would say they would work for it if the have the option to get it for free.
Her friendship with Vanessa was great, though I didn’t always get how these 2 are friends. Yes, I know, opposites attract and all that, but it was just a bit weird. Our main character is all study and work, while Vanessa is more play and have fun. Oh well, I still liked to see them together. And I loved the code-word they had for when a certain thing happened. It just made me laugh aloud.

Then we have Liam, ah Liam, swoon. He was so cute and sweet. I instantly liked him when we first met him on the set. He is a really kind and sweet guy and he genuinely likes our main character and tries to treat her well. I felt sorry for him when all kinds of drama started up. He doesn’t deserve this, he deserved an explanation, a why, a how. After all, even though girls tend to think it, guys are not telepathic.

Vanessa was a fun character and I can’t wait to see more of her in the next book. Even with her being a star in Hollywood she keeps her feet on the earth, doesn’t float away or become a bitch like many others (coughZoecough) would do. It was refreshing. I was worried she might change, but throughout the book she stays a sweet person who you just want to befriend.

And I can so imagine that the drama got out of hand like this. Our main character didn’t know that it would go like this, and like I said, she could have been honest and I think that would have been best. But I can also imagine why she got so angry and sad. She finally has a boyfriend and then finds out that she can’t be with him for most of the time, that she can’t be in public with him, and that she has to share him with her best friend for some marketing ploy. I just wanted to hug her at times and tell her things would be all right.

The book is filled with fluff and romance, but we also have a realistic plot going on. Our main character’s dad is sick, he has cancer and throughout the book we are pretty much front-row on how he is doing. And I can honestly say that I was crying near the end when a certain thing was said.
I am happy they added this plot piece to the book, it gave more depth to all the characters as they were all connected and all cared dearly about the dad.

Ah, I have to give some extra credit to Josh. He was a great character and while he was a dick at times, I really liked him. I saw he didn’t always mean harm.

All in all, this is a terrific book and I would really recommend it to everyone.