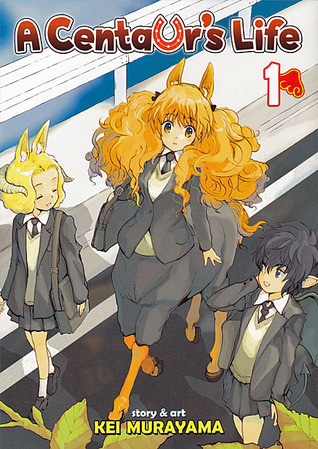 Wow, this was a really weird (but still fun) manga. I am not entirely sure if I will read the rest of this manga, for now I will say no.

Especially the first chapter (Chapter 0) was just awkward and I almost dropped the manga because of things happening there. Hime gets a confession, and is worried about things like romance. About what would happen if she would have sex. She feels insecure about the parts down below. And from there it starts to go just wtf weird. Her friends decide to help her out and show her their parts……. To give her more confidence and all that. You don’t see anything, but it was highly awkward seeing them sitting in front of their friend and commenting on their parts…

Luckily, that chapter was the only one that was weird in that way. The others are more comedy and don’t focus on Hime alone. They also feature her parents, her friends and their lives. Of course, most of it is still about Hime and her life.

All the characters in this book are different species, but they all get called human from what I could see. It was great fun to see such a diverse cast of all kinds of species. It was interesting to see centaurs, but also that some characters had random parts of some species but weren’t really looking 100% like that species.

The art is pretty decent, they did a good job on the cast. I can imagine drawing a horse in various poses with clothes on isn’t an easy task.