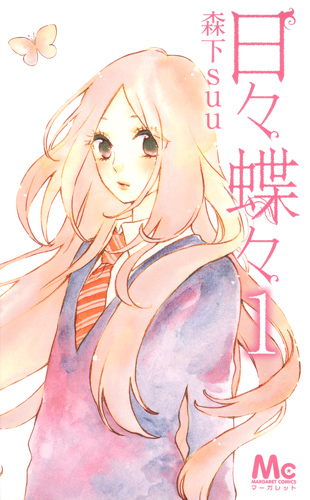 This was a very cute manga, however there were things I didn’t like.

For instance how everyone (boys and girls) just seemed to love our main character. It was just creepy and unbelievable. Just because she is pretty? Mysterious? It seems silly, especially since she has no interest in all of that.

I also didn’t always like our main character. So because of some small stuff happening she doesn’t talk that much? Or show expressions? Um what? That is kind of extreme, and I couldn’t really find much reason in the manga why she would do that, at least not a big major reason that screamed out to me. So yeah, I was just frustrated with the girl, I wanted to shake her and try to get her to talk or at least act like a normal person instead of the weird doll attitude she had now.
I also found it weird that the mangaka didn’t give her a mouth at times. It was kind of disturbing to see a face with huge eyes, a tiny nose (sometimes not even that) and then nothing else.
But she seemed to be a kind girl, a girl who did try to talk more to people, especially to that one boy.

And that one boy was interesting, but I didn’t particularly like his glasses. They just didn’t fit him, he looked better without and I wish the mangaka didn’t draw him as a glasses-guy. Some guys just have that vibe that screams: Glasses! But this boy doesn’t have it.
I also didn’t like how violent he was at times, it just felt off and weird, especially with how he looked.

The art is one of the prettiest I have seen, and it really saved the manga for me. Not always is it good though, I do wonder why everyone is drawn gorgeous, but the friend of our main character is drawn with weird out of place eyes. Eyes that she didn’t seem to have when we get closer to her.

The romance (?if you want to call it that) was kind of cute, and I hope the next volumes will show us some more action in that department.

Yes, this does mean I will continue with this one. At least, I am planning to do so. Not sure when, as this manga wasn’t that good at times, but one day when I am looking for something calm, silent and relaxing, I will continue.