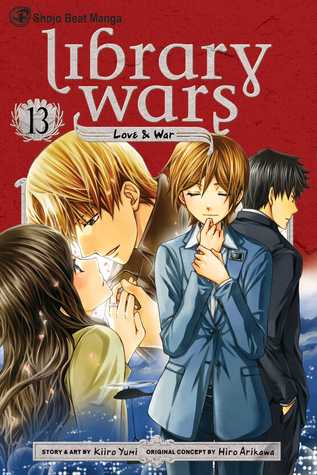 Finally the 13th volume is out!

It was a bit confusing (which comes with the time it takes for the manga to be released (now almost a year)), but you can quickly ease back into the story and find out all there is.

The manga is still on the whole Toma vs MBC/MBA, we are slowly getting to a climax though, throughout this manga there are plans being made, things being discussed and in the end a very big plan is being hatched. At times it was a bit boring, I am not really one to care about things like politics and so at times I was just hoping stuff would speed up. I also (probably due to it taking ages to be released) kept mixing up the whole MBA and MBC stuff. After I read it I just went online to find out what the difference was again.

Of course, the book isn’t only about politics, troubles and fights, it is also about Dojo and Kasahara getting further in their relationship. Though it does get a bit boring that they still aren’t together, yet are flirting so much with each other that it is bordering on too much, especially considering they aren’t in a relationship and are still boss and subordinate. I am just hoping they will get together and will finally be a bit romantic.

Kasahara’s idea was brilliant, though she didn’t knew it would give such a reaction. At times she does have some smart remarks/ideas.

Oh, Oh, I have to give cheers because of the Komaki x Marie part. That part was just so fricking adorable! I was just squealing in delight. Marie is a very lucky girl, and I am sure she and Komaki will be very happy together. 🙂

The bonus manga were fun, it was a nice added bonus.

I am a bit worried about how the mangaka will finish the story, according to an article on AnimeNewsNetwork, the mangaka is fnished with the manga now, which means we will probably either get one or 2 more volumes. I am worried that they author won’t be able to finish it, or will rush it. Both situations would be terribly sad.
Oh well, I guess we will see in a year or maybe longer, depending on how fast the chapters are bundled and how fast Viz will translate them and bring them out.

The art is still fun and I really love looking at the characters, the mangaka does such a good job on them!

All in all, I would still recommend this volume, it was quite interesting (though also boring at times).