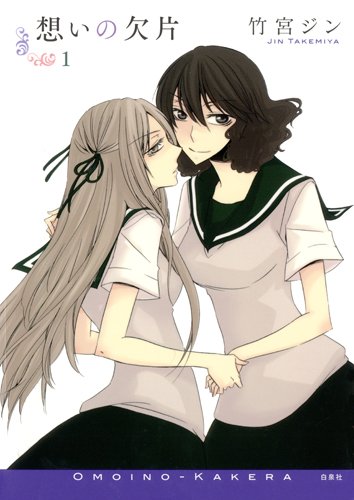 I decided to see if I could find more manga by Takemiya Jin, since I really love their art style and their stories.

This one was a bit confusing. Instead of following a timeline, it shows us pieces of our main character’s (well, mostly our main character) life. One time she is 20, the next she is getting in High School, the other time she makes friends with someone from her High School who is also gay. At times I lost track of the story, but I quickly could find my way back.

The main character was a great character, I really like her and I hope that she is able to find love. I also hope she will be able to come out and let people know about her being lesbian. It was really interesting to see how she got where she is now. How she found out she was lesbian, and that her first experience with a woman wasn’t the best one.

I only didn’t like that they had to add the sister of our main character’s friend in the mix. Chapter 4 and 5 are all about her and her problems ( The 4th chapter is still focussing on her brother (who had a big role in the previous chapter) and our main character and the 5th Chapter is more about the sister and about the main character, but still, when one is used to one character, and we suddenly get another one, it can get confusing). I didn’t particularly like the sister until near the end of the 4th chapter, when we find out about stuff and how she truly feels. Most of my dislike towards her was because of her immediate jumping to conclusions and how she reacted to someone who is gay.
I do kind of get why they added her (probably due to the flashback at the beginning of this manga and the fact she is on the cover), but I still wish the author would have focussed on the main character.

But even with that, it was a pretty decent manga about being gay, acceptance and love.

The Love and Piece parts at the end of the volume were fun, I really enjoyed them.

The art is great, I really love the artstyle. At times the character look a bit weird, but I am getting more and more used to that with each manga I read of this mangaka.