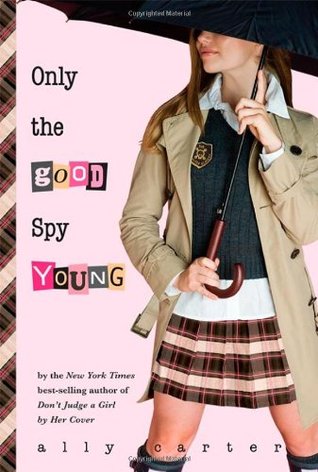 Only two more books to go, and I am not entirely sure if I want to continue.

The books also follow a predictable story line, which makes it even more boring. At the beginning: Something happens. Middle part: Some boring stuff and trying to figure out things. End part: Lots of stuff going on, operations starting and even more stuff is being thrown at you.

But we can see Cammie grow up. From a girl who at times didn’t have a clue and froze like a deer in headlights when encountering boys, she is starting to shape up more and more as a spy. As a true Gallagher Girl. Sure, she still makes some stupid remarks, and she makes some mistakes, but that is fine, that makes her character a bit more rounded.

Ah Zach, I still like him, though I wish we would know what is the deal with him. We find out some stuff, but a lot of him is still shrouded in mystery, and it just gets so frustrating.
I love him and Cammie together, they are so cute.

The ending was great again, though it is just silly that almost all the action happens at that part. And that when you think you know most of what is happening in the story, you still get twists and turns thrown at you.

All in all, I might continue, I might also just drop this series. For now I got enough other books to read, so the decision will be made at a later time.