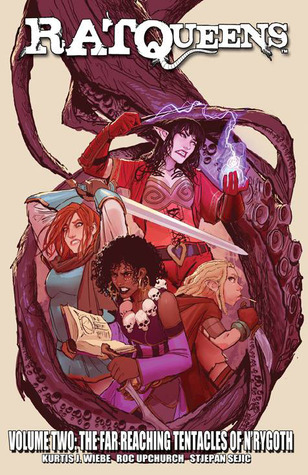 Well.. I am not entirely sure if I liked this volume that much.

The other one, while it had a slightly open ending, did resolve the whole assassin thing. While in this one, things also get resolved, but there is a huge cliffhanger. :\ I hate cliffhangers, especially ones like this.

Another thing that was annoying were the flashbacks. I can understand why they were added, and at times (when the girls where near death probably/losing sense of reality) they fitted, however we also get random flashbacks, which are highly annoying. Not to mention that most of the volume was based on flashbacks. I just wanted the story, and that one was over very fast, it felt a bit weird that a big thing like this was solved like it was nothing. :\

But it was also interesting to see the backgrounds of the girls, and to see how they became who they are now. If these are all true backstories, we don’t know. They could also be alternate realities/dreams. Either way, some extra information or seeing the girls in other (more normal) situations was really fun.

There is still enough vulgarity, gore and sex. At times bordering on disgusting and horrendous. There were things I didn’t want to see. For instance Sawyer’s penis. Yeah, that was mighty awkward.

I am also still confused about Betty. She is an adult, at least I am guessing it, but she is treated like a kid. She gets all kinds of childish nicknames, pats on her head and more, and it makes it really hard to see her as an adult then.

Violet and Dave were pretty cute, they had quite a few good moments.

I am still interested in finding out more about the other 2 girls, hopefully we will get more background on them in the next volume.

The art was still pretty good, though there were a few instances that made me wonder if the artist knows about anatomy.

All in all, it was a pretty decent graphic novel, and I am kind of looking forward to the 3rd Volume in this series. Guess we will have to wait for a while though. Oh well, I can wait.

One thought on “Review for Rat Queens Vol.2: The Far Reaching Tentacles of N’rygoth”