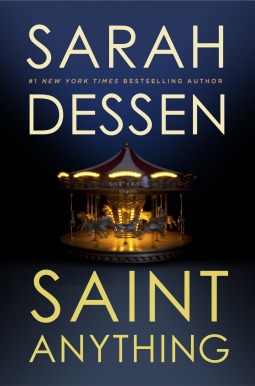 This book was magnificent, fantastic and absolutely amazing!

Sydney is one of my new favourite girl characters from books. She hasn’t had the easiest life, her brother kept falling into trouble, her parents (especially the mom (more on that later)) don’t care that much about Sydney, though they do compare her to her brother, Sydney never makes mistakes but her parents treat her pretty much with distrust. I really disliked that. Just because one of your kids made a mistake, doesn’t mean the other will do that as well.
But Sydney does her best to go through life, she moves to a different school, she makes friends and tries to stay friends with her friends from the other school, she finds love, she tries to live with the guilty conscience she has (because she feels like she has to say sorry to the guy who was hit by her brother), she eats lollipops and has to dodge a shady guy that her parents see as a great guy.

Sydney is a great friend, though I wish she was honest about some things, at times I was just thinking: “Oh, this is going to go so wrong, so soon.” And then it indeed happened. But, I can also imagine why she didn’t say anything. Her best friend was pretty clear about some stuff, and she didn’t want to hurt their relationship.

Quite a few times I don’t like books with a lot of topics, sometimes it is just not handled well and you feel like you are being pushed in a big heaping pile of it. This one also has a lot of topics, some very heavy ones, but Sarah Dessen weaves the story in a way that it makes you not mind the overload of topics. All the things are connected, all the topics are dealt with at a good pace and at a good time. Slowly building up, then finishing them off in a good way.

We have a big cast of characters. A cast that is all connected to our brave, wonderful girl Sydney. Not with only all nice characters.

I didn’t like Ames, I didn’t trust him from the first time we met him. He just had that use big warning sign flashing over him. Watch out, watch out, he will harm you. I didn’t understand how the parents never noticed, never noticed that their daughter was trying to get out of the times he was sleeping over, how they never noticed that she was trying to tell them anything. It is a clear sign that they had their minds elsewhere, and sadly things had to go wrong before they saw the things, before they saw their daughter’s fear for that guy. 🙁

I loved Mac, he was a terrific guy. Sweet, caring, listening, he was there for Sydney and he was just the perfect guy for her. I won’t say much else, for that might be spoilers, but I just love that guy.

I adored Layla, I loved her little quirks and the things she did. I am so looking forward to eating fries the way she does. I just want to try it out once, maybe even more if it goes well. Layla is a great friend and I just wanted to hug her, for being there for Sydney, for being at her side and taking time to listen. And sure, at times her life wasn’t easy and their connection was stretched out, but I knew they would strengthen that connection soon again.

I loved the other Chathams, they were a great and happy family, even with the whole mom situation, they tried their best to make something out of life, to continue and try to make every day a good day.

Sydney’s mom is horrendous. It was just sick and disturbing. I hate parents like this and I was just disgusting with that mom. She was so in her own world, only caring about Peyton after all hell broke loose and treating him like he was 4-year old and in preschool or something, instead of facing the fact that her son made a mistake, and has to stay in jail. Prison. Stuck, not just in school. She wouldn’t listen to anything, and expected everyone in the family to just be ok with whatever she wanted. Whenever she wanted. And oh dear, if they didn’t want that. No, no.

All in all, this book is fantastic. And it is a book I would highly recommend! Be warned; May make you crave lollipops. 😀 Also bring tissues!