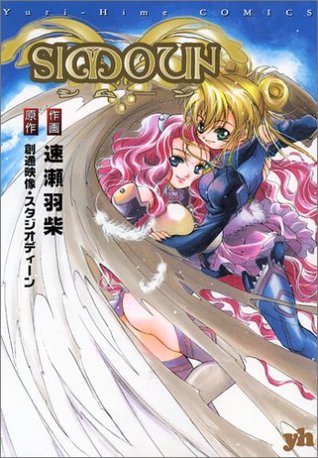 I watched the anime for Simoun many years ago, and I was curious as to see if the manga was any good.

The manga is pretty short (3 chapters + intermission), but even with that, there is a complete story in this one. I am not entirely sure if the manga can be appreciated a lot if you haven’t watched the anime. They do explain some stuff, but not everything, so I can imagine it might be very confusing to readers who haven’t watched the anime. And while this story tells us clearly about the meeting between Aer and Neviril, it was just a bit too fast at times, and they don’t really explain the pairings or why the girls need to fly, what the whole choir thing is and several other things.

I am also still not sure if I would classify this manga as Yuri/Shoujo Ai. Considering the fact everyone is born as female and they have to wait until they are 15 before they can choose between being male or female. If it was a normal world, where people are born male or female, and all the females still decide to kiss/be in relationship with other females, then I would have seen this as Yuri/Shoujo Ai. But now? Not so much, especially considering that many females might turn male when they have a chance.

The art is gorgeous, it is really a feast for the eye. The anime also was quite beautiful, but I have to say the manga tops it all. I just couldn’t stop watching all the pretty details or how the “girls” looked. The mangaka really did their best on it.

The story, as I said, is complete, and I am happy they managed to get that done in 3 chapters. I was a bit worried that it would end up open-ended, but luckily everything is resolved.

I didn’t particularly like Mamani, I think she was a stuck-up bitch. And sure, she has her problems, but come on. No need to act all entitled and stuff.

Also plus-points to Aer’s hair. Wow, it looked already a bit over the top with those buns, but when her hair is loose, it looks like her hair is alive. 🙂

Would I recommend this manga? Yes, and no. Yes, if you saw the anime and are curious about some more Simoun stuff. No, if you haven’t seen the anime.