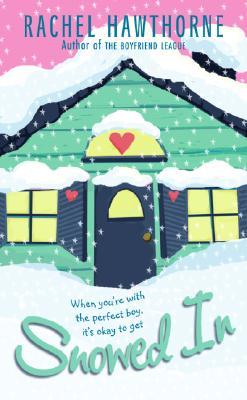 I am really starting to love this author, she makes some pretty swoon-worthy and delicious books.

This one is my second book from this author, and this time instead of an island with sun, we are at an island covered in snow and cold. And it is shut off from the main land during the winter, which, as the main character likes to tell us, is a perfect horror setting. Yes, our main character loves horror.

I loved the setting, and I can imagine the mom moved away from Texas. Divorcing your husband 2 years ago is one thing, but hearing he is also marrying his new wife, I can imagine that one would want to search for newer and fresher grounds. A place to start anew. Even if that place is freezing cold and filled with snow.
I really can’t imagine that a school is this small, our classes here aren’t that huge (not like our main character’s school), but they also aren’t so small that there are only 5 or 6 people in them.
I would think I would get bored seeing the same 5/6 people every year, for 16/18 (depending on the education level) years. I am sure I would be friends with them, but I am also the kind of girl who likes to try out new things and might get bored from seeing the same thing over and over again.
But the island sounded really nice and like a wonderful place. There are enough descriptions of the island and I could just imagine myself there. In the winter, all bundled up and drinking hot chocolate and wandering across the town. In the summer, wearing shorts, shirts and going to the lake.
Victorian houses/cottages sound wonderful. I hear a lot about them in my books, and checking photographs of them, they look wonderful. I would love to see them in real life one day.

Our main character was a fantastic character, she is honest and she tries to do her best to get used to her new place. She is quick to make friends and she also picks up on the slang that they use on the island. Of course, not everything goes right, she falls for the one guy she shouldn’t fall for. However, unlike quite a few books I read, this girl tries her best to steer clear of the guy, and gives him plenty of hints that she doesn’t want him this way. And that she is also not really the kind of girl to commit to a relationship. I loved that. Not a lot of girls would be so clear and so vocal, most would just either go crazy or just go out with the guy. But yeah, she is falling, and she is falling hard. She does try to date another guy (who she met before she fell for that other guy), but she quickly notices that he is not the one for her. Especially considering his feelings for another girl.
I really liked that our girl loves horror movies, it is something I enjoy watching too, and when I heard she liked J-horror, I was just squealing in delight that someone else knows about those!
She is also a great friend and tries her best to keep in touch with her best friend in Texas. I know a lot of friendships break apart due to the distance, but I think I can see that these 2 girls will be forever friends.

Josh was decent, I didn’t particularly like him at times. I wish he would have been honest with Nathalia, but I can also imagine that he wouldn’t want to break up or hurt his relationship with Nathalia. The town is so tiny, and you are really stuck with the same people, rumours may start, people may start to dislike you and you will be stuck with no easy way out. But I didn’t like how he flirted with one girl and then had a girlfriend. Even with everything going on and all the circumstances, I don’t think this is good. You can’t just do that. Luckily, he does feel guilty and we get shown that quite a bit.
But I also saw a side of Josh that I really liked. I liked that he was sweet and that he really cared about our main character. I won’t say anything else, you will have to read the book to find out what will happen between the main character and Josh.

Then we have Nathalia, I didn’t like her that much. She was nice, but she was also a bit possessive and I didn’t like how she called people not by their names, but by their titles. Josh = my boyfriend. Our main character: My new best friend. It got quite tiring to see her use titles for people. While it wasn’t right, I still couldn’t help laughing when people made jokes about her doing it.
I also didn’t like how nosy she was. How she apparently had no respect for privacy. Instead of giving our main character some time, she pushed and pulled. She just barged into the main character’s room and there were also other times where she just seemed to force things on people.
I am sure she is a nice girl, but I think she is a bit too nosy and a bit too much into having a boyfriend for just that.

The story was really fun and I really enjoyed myself. There was a lot of drama, romance and fluff happening, just the kind of book I am in the mood for.

Also I loved that all the guys were apparently super hot, and that we got enough details about how they looked to do a lot of swooning. 🙂

I would really recommend this book to everyone! Are you in need for a bit of fluff and drama? Do you want romance? Then try this book out.