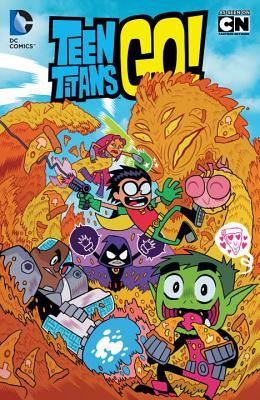 I am watching this series (Teen Titans Go!) and when I found out it also had comics, I decided to check it out and see if it was just as good as the cartoon series is.

I have to say this: yes, it is good. However. I would also recommend that people watch the cartoon series. At least one chapter spoils the outcome of an episode, and while in that specific episode it was quite clear what happened, I think it would still be a shame if you didn’t watch it and later watched it and knew all about it.

Each chapter/volume brings a new story. In 1 the Teen Titans would be participating in an idol show, the other they are golfing. It is all great fun and I was laughing quite a few times at parts. It is great to see the characters in this format, and because I watched the series (at least the first one, I am still going through the other one), I could just imagine the voices with the stories. It really gave me something extra and made the comic more fun.

The art is pretty good, not always perfect, but it fits the silliness of the Teen Titans. The stories are all over the top, so it isn’t too bad that the art is that as well. I still love the vibrant colours that always seem to be come with these Teen Titans, be it comics or the tv series.

Would I recommend this comic? Yes, yes, I would. But like I said before, be sure to also watch the series.