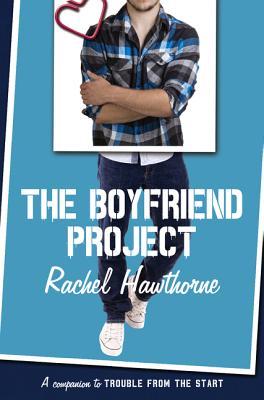 Another Rachel Hawthorne book, this time her newest book, and what a good book it was. It had some ups and downs, but generally it was a lovely book and I enjoyed it.

The book shows us 2 perspectives, Kendall, the girlfriend, and Jeremy, the boyfriend. I love that this was done, it showed us both sides of a story. Showed us what Kendall thought, but also why Jeremy did what he did. It told us more closely what is going on in the lives of both these characters.

For instance, Kendall is quite a control freak and likes to have everything right and straight, this due to the death of her dad. An accident for which she still feels guilty (even though she shouldn’t feel that way, as it wasn’t her fault, but she wonders about the whole if she had been faster with stuff, maybe he wouldn’t have been where he was when the accident happened). At times her controlling nature just got annoying. For instance in the store? That she wanted everything correct? Or the way she got a bit too overkill on the whole Jeremy needs a make-over thing. I just wanted to shake her around and tell her Jeremy is good enough. That it is nice and all that you want him changed a bit, but that you should also respect him when he says no, and that you shouldn’t push it too much. You can clearly see that Jeremy is at times uncomfortable, but for some reason she just barges ahead.
And she was also a bit confusing. She wanted people to notice her boyfriend, and when they did, she didn’t want them to do it and she became jealous. It was a bit strange and I was just shaking my head and saying to the book: “Yeah, girl, you wanted this, now don’t complain!”
But, she was also really sweet and truly cared about her friends and her boyfriend. I loved how she was with animals, how hard she worked at the shelter and her love for Bogart was wonderful.

Then we have Jeremy, who doesn’t have the easiest life at home. His parents see him as a mistake, see him as the one who ruined stuff. Well, his dad hasn’t said it specifically, but his mom did. I can only imagine how much that must hurt, being called a mistake.
His dad also is a dick. From the first time we met him, until the last time, I just disliked him so much. The way he treated Jeremy, like Jeremy was some kind of carbon copy of him, but this time he could make the dreams come true.
Jeremy was a nice character, and I liked that he did try his best to change a bit. Slowly but surely. Sadly, this also showed a side to Jeremy that I didn’t like. I won’t say what, I will leave that up to be read. But lets just say, I didn’t expect that to happen. He was so sweet and kind.
However, considering his life and how Kendall pushed him, I can somehow imagine why he did all of this.

The story is really good and I loved the setting. One couple, one last summer before college, a chance to change and become different people, it was really fun.