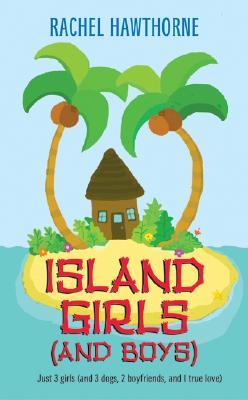 I found out about this author due her latest books (Boyfriend project en Trouble From the Start), and from there I thought to go on a hunt to find out more of this author. And my first book is now The Island Girls. A book that, while it had some stuff that I didn’t particularly liked, was still a great fantastic book about romance and summers and vacations.

The problems I had with this book didn’t particularly have to do with the story, it had more to do with the characters. In the end I had a problem with one girl especially, a girl named Chelsea. Dear Lord, that girl is spoiled and a total bitch. I could forgive the other girl, named Amy, as she had a reason why she did the stuff she did. Sure, that didn’t make it much better, but at least I could understand why. I will discuss more about this in the later part of this review.

Because, let us start with the good stuff, the story and the romance. There is a fair amount of romance in this book, our main character isn’t the only one in love/finding love and it was delicious to read about them. Of course, the main character was the one we read the most about, but, we also find out enough about the other girls as well. It makes for one big swoonworthy book. With lots of dreamy guys.

The story was great fun, I was really interested in the whole being on an island and doing work for 3 months while also having fun and getting used to being away from parents (since these girls are through with High School and are planning on moving on to college come Autumn. Though the island didn’t at times feel like an island, it felt different, especially when they told us that you could get to the mainland easily. It just did away with the magic feeling I had in the beginning. But, it still was fun, and I enjoyed reading about the island, about how time went there, how the tourists were, what they ate and did at the island. I wish I could see such an island, though with all the descriptions, I could easily imagine myself there and enjoying a cool drinking while reading a delicious yummy book.

I also loved to read about the work they did. It didn’t seem all too fun at times, especially when the days turned hot and busy, but I loved how for most book they kept going on with their jobs. Of course, during the later course I had a few times where I was shaking my head at their lack of work ethic. Especially that of Chelsea. I can see this girl ending up being supported by her parents for life. And I can see them not minding it that much.

Our main character is a fun character, but she was a bit of a doormat. She let a lot of stuff happening and people just talking bad about her without much of a resistance, but, I can somehow understand why she does that. After all, people don’t seem to appreciate her opinions that much…. though I can again see why people do that. Our main character is quite obsessed with plans and lists, a skill that might be nice and handy at times, but when it is more of an obsession is a trait best forgotten. Now she demands a lot of things, and while she was right on quite a few things, she was also overkill on many others. For instance, I did agree with her on her points on getting the room, it is her grandparents home, isn’t it logical that she would get the room? Or with her rules on not letting anyone else in but her friends and such, and the no party thing? I can imagine, you don’t want your grandparents come back home and find the place wrecked. :\ But for most she was a good character and I liked her relationship with Dylan. They make a super cute couple and they are really meant to be together.

And that brings me to the whole relationship stuff, I loved it. They were really romantic, and unlike a lot of books, they didn’t have sex immediately. They took it slow, sweet and slow and it was just wonderful to see them grow more and more together. Of course, something happened in the middle and that was bleh, but the end really makes up for it.

Now it comes to the bad characters. Chelsea. Dear Lord, what a bitch, I really truly don’t understand why our main character is friends with her. She is spoiled, a brat, doesn’t care about the rules, lies, has terrible work ethic and bitches and moans about everything and anything. I nearly dropped the book a few times due to her attitude. I can handle a bit of a brat, but this much? No, just no. And sometimes I start to like the person, sometimes they changed, and sure, Chelsea showed some improvement, but it was just so small, so insignificant, and mostly for her own gain that I never started to develop like feelings for her. If anything, I wanted her erased from the darn book.

Then we have Amy. She was a nice character, but she fell away to the background so often that I forgot about her at times. Like Chelsea she also ignores the rules set, However, we find out why she did it, unlike Chelsea it wasn’t for a really bad reason. I won’t say what the real reason was, but I was delighted when I found out and my opinion of her soared upwards again.All in all, this is a terrific book and I really enjoyed it. I would really recommend it to all seeking a nice summery book with tons of romance!