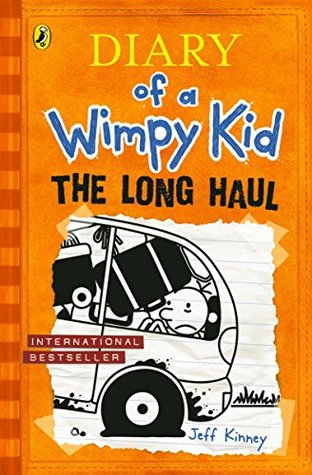 I should have listened to the me from a year ago. The me who said that she dropped the series. Sadly, the current me was curious and wanted to know if MAYBE the series would get better. Let me just tell you this: It doesn’t.

I am now officially really dropping this series and I will not read any more books, no matter how tempting or how interesting they look. They aren’t going to get better. So me in the future, remember, no more of these books!

This book was horrendously boring and just, once again, the same old, same old. Again we have bad humour, rude people, parents who really shouldn’t have gotten kids, an annoying brother named Manny and several unbelievable stuff that wasn’t even funny in the slightest.

Let’s start with the characters. I really don’t see how these parents got kids. The mom has some funky ideas about parenting and while not all are bad, they aren’t all good and healthy either. The dad is especially weird.
And who the hell packs their cars so full that one of the family has to sit in the back on the baggage WITHOUT any safety. One accident and you will probably lose someone.
Also they are just way too cheap. I can imagine you might want to save up and only spend when necessary, but come on. Throughout the book things could have been prevented if the parents had actually used some money on stuff.
Our main character is once again just boring and whines and complains about anything. His attitude is horrendous. Maybe we are supposed to feel sorry for him, for having such a bleh family with a brother who does anything to ruin people’s life, a little brother who gets all the attention and parents who are way to weird, but I don’t feel sorry for him at all.
Rodrick was just…. well.. Rodrick. I never really liked him, I found him rude, mean and a bad brother. I have read enough stories to know that the relationship between brothers can’t be all nice and all, but this is at times ridiculous.
Manny. Urgh, I hate that little kid so much. He is like a Rodrick and our main character in one. Rude, shitty tantrums, bad attitude and so much more. And yes, I know it is a little kid, but come on, we are through quite a few books and he never grows up, while the other characters do change (a little).

The story is just super ridiculous. I know this is a fiction book, but I would almost call this book magical with all the stuff happening that I can’t believe would actually really happen. Things like getting stuck in a motel with bad people who apparently go the same ways as you do, Manny doing magic stuff (more on that later), winning a pig and then the trip and everything that happened with that pig, being attacked by seagulls IN YOUR CAR and several other things. It was just stupid and I was wondering what would be next? Magical teleportation? Winning the lottery? Other stuff? If you make a book about a road trip, and you want to add some accidents happening, that is ok (since that might make it more exciting), but this was just bad. It seems nothing good could happen on this trip and everything that could go wrong, did go wrong.

The potty humour just was disgusting, and I also don’t see why they did have to put a potty between the seats. I know, Manny might need to go, but I just felt sorry for the people behind and next to it. Disgusting!

Also, what is up with those parents? Are they that cheap that they can’t even buy their kids shoes? Rodrick lost his shoe early on and his parents just let him walk on his sock/barefoot? And later just give him bandage? Wth?

All in all, this was one terrible book and I wouldn’t recommend this one to people.