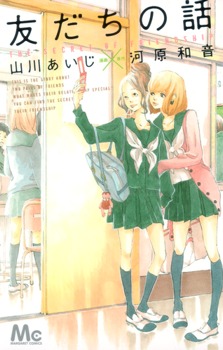 This was a very interesting manga about friendship.

There are 3 chapters (and a bonus, but that one features another character that doesn’t seem to have to do anything with the characters from the first 3 chapters). The first chapter is about Eiko, the best friend of Moe, and how she feels to be around Moe. We get to know the girls and how they feel about each other and also what happens when Moe gets a boyfriend. The second chapter is from the perspective of the best friend of the boyfriend from chapter 1, he is quite frustrated with girls and he shows his anger by bullying Eiko. It was quite sad, but I also loved how Eiko reacted to all this. Didn’t get angry, didn’t get pissed, no, she stayed slightly calm and told him. The last chapter is from the perspective from Moe. A perspective I loved, as it gave more insight to this girl, the girl that connects all of the characters. She is not just a pretty face, something we already found out from reading the first chapters, but with this one we truly find out what made her so angry towards men.

I really liked that they told the story like this, I was a bit worried it would only be about Eiko. Don’t get me wrong, Eiko is a nice character, however, she is also terribly boring and a bit too much of a follower. She has her good points, but all in all, I just wanted another character. And I got my wish.
I think out of all the POVs we got, I liked Narugami the most. At first he was a dick, but we can also clearly see why he is like this. And he does change, and he is a wonderful guy underneath all the façade he is putting up.

Moe was an interesting character and I really like her. Her attitude could use a bit of tweaking, at times I found her a bit too bitchy and manipulating, but at other times I just loved her. She was great with Eiko, protecting her like a mother would.

The bonus chapter was pretty boring, and I was actually hoping for a side story about our main characters. I didn’t want to read about a new girl and her friend and boy problems. Though the ending was cute, and I really liked Tomoya.

The art is gorgeous and I love how the characters are drawn. Sure, the art is not perfect (at times the faces look a bit weird), but that is only sometimes, most of the time I love it.

If you are looking for a manga about friendship between girls, and this time the genuine one, one where the girls aren’t bitching or trying to diss each other when they are away from them, then try this one!