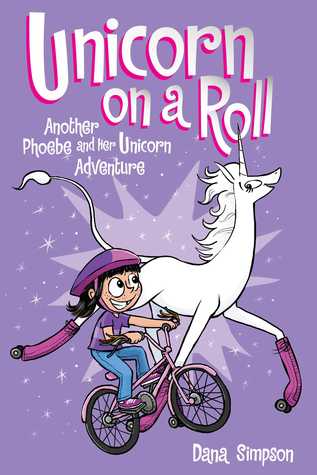 I am not entirely sure if I really liked it, for now I give it a 2 stars. Maybe it was because I never read book 1, though I feel like that isn’t needed, there is enough flashbacks or memory recalling in the comic. I think it was mostly the characters.

I have seen people compare this to Calvin and Hobbes, and after reading, I can say I am not agreeing with that. Calvin and Hobbes was awesome, Calvin was great and a little evil master mind with a big imagination and a lack of seeing consequences, while Hobbes was a great friend who was awesome, and while he warned, he mostly didn’t care to interfere and participated often.

Phoebe seems 7 or 8 years old, but she felt more like she was an adult stuck in a kids body. I didn’t always like how she talked, I didn’t like how she acted. She seemed pretentious. Also kids don’t know about radio stations any more? Seriously? Am I too old or something, or is this just a weird thing. But from what I know (and also saw on Reddit), radio stations get advertised on big billboards in America (and I am guessing this story takes place there). So how can she not know about this? Is she blind? Is she living in a place in the middle of nowhere? It was just a bit weird. Or again, maybe I am just old.
Still, she had some moments that were fun. I really liked how she was with Marigold, how their friendship was cute and I knew they were great friends.

Marigold, I didn’t like her for most part. I found her rude, mean and too snarky and sarcastic to be funny.

Another thing that I didn’t like was when we have a longer running story (for more than one page) that there would be a random page that had nothing to do with it in the middle/after a few pages. It really distracted me. I would be reading the story, then going to the next page, thinking: Oh, the story is over? That is a shame. reads page, flips to next page Wait? What? Why is the story continuing?
I think it would have been better if the stories continued without interruption of a random comic in-between.

I also skipped the whole introduction. It was just not my cup of tea.