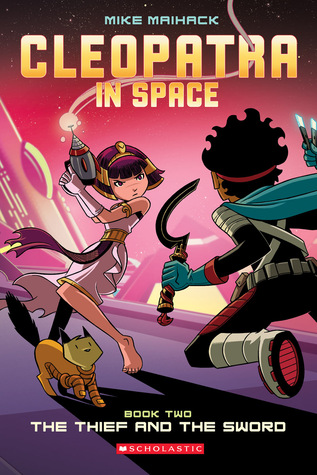 Another epic book in this epic series. Now I want book 3!!!

And we are back to Cleopatra in this second volume. And what a second volume it was, we got thieves, swords, missions, but also some real problems and friendship.

Cleo, ah Cleo, at times I really liked her, but other times I just wanted to shake her around. I didn’t like how she avoided Brian in the first part, how she dodged him the whole time. I can imagine she did it, her: “Go dance with Akila.” said enough.
I also didn’t like how she thought that she should save everyone all the time any time. On the one hand I admire that trait, but on the other hand, you are still a teenager, you still have much to learn, you are also the chosen one, yet you put your life on the line like this. I can imagine that people might not be delighted, especially when you also destroy the campus (though to be fair, that was mostly the thief).
But she was also a good friend to Akila. Trying to comfort her when certain things were revealed/told.

Octavian is one creepy dude, seriously someone you shouldn’t mess with because he will make sure your days are numbered.

I loved the latter part, though shakes fist I didn’t like the cliffhanger at the end! Gah, now we will have to wait for some time to find out what will happen to our crew and their mission.

The art is once again really great, it all just fits the story perfectly! I also love the colours, they are really vibrant and make the action scenes just come alive.

Would I recommend this one to people? Yes, I would! Just be warned, if you don’t like cliffhangers, I would recommend you wait until the next book (though there is no telling yet, if that one won’t have a cliffhanger).