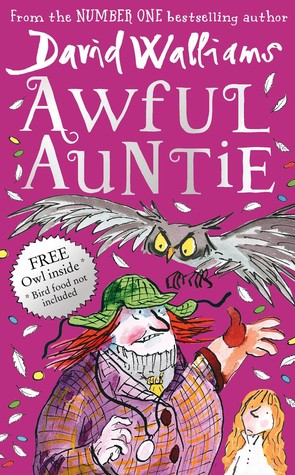 Even though generally David Walliams books are hit and miss, I just keep reading them, hoping to find another one that is good. Did I like this one? At times, yes, but mostly no.

Stella was a great character, it wasn’t her fault. She was the reason why I gave the book 2 stars at all. Even though her life is turned upside down, even with the loss she has suffered, she keeps on fighting. But she also shows emotion, we can see that she is terribly sad, and afraid. Yet, with the help of Soot, she continues her fight against her auntie and her auntie’s evil plan. Even though she grew up in this big house, she wasn’t that spoiled. Maybe it had to do with the fact her parents were practically poor, thanks to the awful auntie. Still it was refreshing to see a girl in a big mansion not being a total princess about everything.

Soot was an interesting character, though I knew what he was, his role and everything else, from the start. It was just so obvious that it would be odd had it been something else entirely. He was a good friend to Stella, though I felt sorry for the idea that she would lose him so soon. His accent was a bit annoying and it took me some time to get through the parts that featured him talking.

Aunt, urgh, most horrendous character ever. Dear Lord, I do wonder why no one took action against her, why no one could see how she was, how no one had any idea. Her brother (Stella’s dad) was just way to generous, he should have said no from the start, instead of letting it go on like this.
She is terribly evil, like a devil has possessed her. It was just creepy and disturbing, she was a horrendous character, not only in attitude but just generally as well. She had no value, but being a villain and a bad person. It would have been nice if there had been some growth, though I guess with the fact she was evil from the beginning, there is no helping her.

The Owl, Wagner, was an interesting addition to the story, though he was horrendous in the beginning, mean, bleh and all that (but I mostly blame Auntie for that), I liked how he was at the end.

The revenge plan? It was fun, but was that toilet part necessary? It felt silly, unnecessary and quite disgusting to read it. Pee and poo “humour” isn’t something I want to see in books.

The story itself, it felt like it could have easily be done with 100 or so pages less, now it felt unnecessary and overkill. Which is a shame. And at times the story was just really disgusting (the whole feeding Stella food that was mix and pulverized by an owl? Ewwwwwww.

Because that is also what the problem is with the books, they are over-the-top, overkill and trying way too hard to be funny. Trying to be funny is one thing, when it works, but this just feels like someone is trying to hard to make sure people laugh, trying to insert any silly situation or puns.

The ending was just a bit too dramatic and too much for me. I had hoped for something else, but instead even the ending had to be silly and weird like the rest of the book. It was also a bit disgusting.

The illustrations are still fantastic and I still really like them, and they are still another big reason why I still read these books.

Would I recommend this book? If you don’t mind an over-the-top, trying to hard to be funny plot and a terrible character, then sure, read this one.