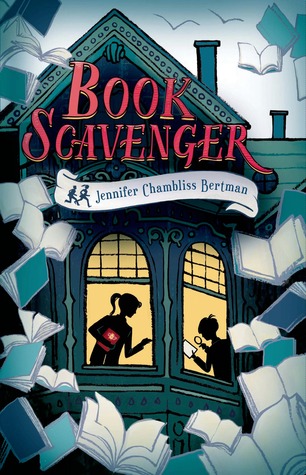 This is THE book to read if you love puzzles, books and scavenger hunts. The book is filled with fun riddles/puzzles, the scavenger hunt is delightful and it will make you want to be there and there is a LOT of talk about books.

I do wish we had such events in real life (scavenger hunts and other book events), or such a site as the site mentioned in this book. It does sound terribly exciting, to be able to hide and find books, to make up riddles, to track your book as it starts its exciting journey through the world, to rank up to the Sherlock level and oh so many more things. Maybe some day such a site will come in existence, and hopefully one for my part of the world too.

Emily was a wonderful character, though I did feel sorry for her. For having to move so much as she did. For never being able to make friends because of this, for always having to wonder when the next time will be that they will move. It is a theme that comes back in this book, it gives something extra and I love that it was added. I can imagine that her parents want to move, and I can also imagine that back when the kids were still young that it was easier than it is now that both of them are older.
But back to Emily, I love how smart she was, how much in love she was with books and how she just loved to solve and create riddles. She just felt so real to me and I could connect to her. So throughout the book I was just cheering for her, hoping that she would solve the riddles (which I also enjoyed trying to figure out), hoping that she was right about this scavenger hunt. And I cheered for her when things escalated and the scavenger hunt got extra exciting and a bit scary.
She was really dedicated to solve the mystery, to help out Mr. Griswold.
Her friendship with James was fantastic and they really matched together, I just knew that they would be great friends for the start.
Of course she also had faults, for instance she was super focussed on the scavenger hunt, but forgot about other things, and she hurt people because of that. Focussing is nice, but you also need to watch around you at times. See that you have people who care about you and want to be with you, not with you and that one thing you are focussing on.

James, I really liked him and how he was. He was a really interesting character and it was delightful to see him solve ciphers and riddles like it was nothing. It is amazing. His family also sounds really great, always visiting, making delicious meals and so much more.

His rivalry with that one girl (whom I really thought was a guy) was interesting and it gave the story something extra. But I didn’t like the girl that much, she was annoying, would do anything to get to the top, even if it meant going for the bad road. I didn’t like how she acted like she was so much better than anyone else.

There was one guy that I totally detested and I wish wasn’t added to the book. That person would be Mr. Quisling. He was a horrendous person. I don’t care that teachers need to be strict at times, the things he did. Sorry, no. I just wanted to throw with things when he popped up and when we found out stuff about him. Bleh bleh and bleh. Horrendous character in both worlds. :\

The bad guys? They were the perfect kind of villain, not too scary or too creepy so kids will have nightmares, but still villains that kids will be a bit scared by them. Especially the later parts will make kids (but also adults) excited, it will make them cheer for the good guys and will shiver in delight to read how it will all end! Will it end up good? Or bad? What will happen to the baddies and the goodies?

The story itself was great. Like I said it is focussing on Scavenger Hunts and books and riddles, but it also shows a brother-sister relationship and how that goes, it shows us what how kids feel when they move every time, how moving is on the one hand exciting, but on the other hand it is not always fun, it shows us about friendship and rivalry and much much more. The book is filled with awesomeness and you won’t be able to put it down.

The book also has some illustrations (sadly, not a whole lot, I had hoped for more). I really liked the illustrations, they truly fit the style of the book and they gave us something extra to enjoy while reading.

What more? Ah yes, I loved the introduction, the Book Scavenger explanations and who Mr. Griswold is. Through the book there is enough explanations or little history lessons about things in San Francisco and I loved that this was added. I could imagine the world more and more with those explanations.

All in all, this is one book that is a must-read for all the bookworms in the world. Highly Recommended!