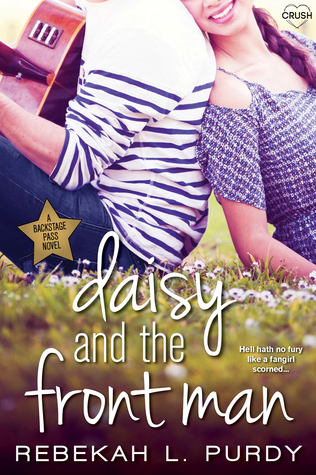 Well this was a struggle to get through at times. This was mostly due to the characters and how they acted. Dear Lord, idiocy is strong in these ones. I also noticed that while it wasn’t bad that I didn’t read the other 2 books from this series, it still felt like I missed something. Which is a shame, but oh well, not much I can do about it.

Where to start, maybe with the good things first?
The romance was (when it was there) pretty good, Daisy and Trevin have a great chemistry going on and they are super adorable together. I really loved the moments that they were together and were they had some sweet romance going on.

The ending was adorable, but oh so predictable. I especially loved the epilogue, it was so super adorable!

It does make me wonder, will we be getting 2 other books? So that the other 2 guys that are still remaining get hooked up too? Or will it just be these 3? It would be fun if there would be 2 more.

The revenge plan, and the revenge stuff, it was an interesting touch and it gave the book the extra spice, still a bit sad that it wasn’t executed better. At times it felt half-hearted, an afterthought, especially during the times that Trevin and Daisy really hit it off.
But I did have a few laughs when she did stuff to take revenge. Too bad they were few, but the ones she did were great.

Now we get to the parts I didn’t like.
Daisy. She was a great character at times, but I hated her Cold > Warm > Cold stuff. It just got frustrating, and I wish she would just be honest with Trevin, get the whole revenge stuff over with it, or decide to just tell him why she was acting like a total bitch one time, but at other times would swoon over him. I know, she wanted him to figure it out, but sometimes people are just oblivious and they need a small (or a big) hint.
I did like her music skills, and I loved that she tried to reconnect with her dad. I also loved that she didn’t mind her mom going on a vacation with a boyfriend. I know that in lots of books this is a big thing, but here it was just done like it was no big deal. Sure, she wasn’t all to happy that they might get married, but she didn’t totally oppose it.

Trevin, I am still not sure if I like him, or don’t. At times he was a great character. Sweet, caring, funny. I loved his heritage and that he cared so much about it. But at times he was just super clueless. Doing that to a girl, twice. Not letting her know, twice. Not remembering her, once. Nuhuh, that is just bad business guy, and you totally didn’t get it until she dropped the big revenge bomb. sighs
I also didn’t like that he made a bet with another annoying character named Ryder. What did he think, that Daisy wouldn’t find out? snort Silly boys.

Then we have LJ, urgh, horrendous character, caring more about his money and status than about the people who he manages.

Beau. I get it, you are protective, but seriously? This much? It was just ridiculous and stupid. I disliked him throughout the book. This is not the way you will connect with your daughter. Putting down ground rules is one thing, but being there always? Keeping an eye out every time? Jumping to conclusions? Not listening to your daughter when she tries to explain? Nope. Nope and nope.

All in all, this book had good moments, but also bad moments. So I am rating it a 3 stars.