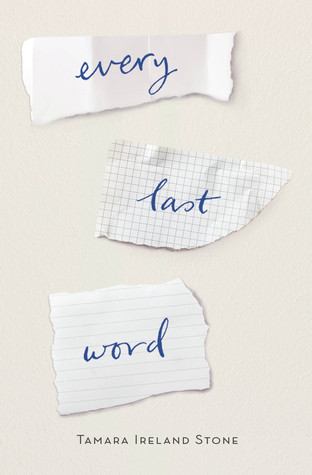 I think I found my favourite and absolute best book of 2015, I think that no book could beat this one.

I have read some amazing books this past year, but none can top this one. This one broke my heart, taped it together again, broke it again, it made me cry, it made me sniffle, it made me want to hug Sam, it made me feel all kinds of stuff, and if I could I would give this book 6 stars, because it is just that amazing, just that gorgeous and it is a book that EVERYONE should read.

I have to be honest, I was quite a bit worried about this book. I have read several books about mental illnesses this year (it seems that there are a lot this year), but none spoke to me like this one did. The others all felt slightly fake, while this one was just so real, so touching, so heartbreaking. So yeah, I started with hesitation, and slowly I opened up to the book, couldn’t put it down, it was just pulling me into the world of Sam, Sam and her OCD and how she survives the world with her brain that does scary stuff, that changes her thoughts to whirling storms of doom and pain. A brain that makes her obsessed with the number 3, a brain that makes her anxious, a brain that just doesn’t shut down. A brain that just doesn’t seem to stop, of course she has medication, of course she has help, but it still is a life that isn’t always easy, a life that sucks at times, a life you won’t just share with the world.

Sam is a totally amazing character and she truly felt real to me, she wasn’t just a character any more when I got to 1/4 of the book. I wanted to cheer for her, to tell her it would all end up to be fine, that she would be ok, that she will make friends, new ones, ones that she can share her craziness (as she so often called it) with. Friends that accepted her and loved her.

Not once was I frustrated with her, not once did I want to shake her around to get some sense in her. I could just understand her so well, I can understand it isn’t easy to drop friends you have known for so long, I can imagine that she is afraid to spill her OCD to people (I know from experience how people will react when you tell them you have something, something people might find scary), and many other scenarios made me just nod a long, made me just want to reach out and help her out. Luckily Sam has found some great friends. Caroline, AJ, Sydney, Emily to just name a few of her new friends. She also has a sport that she is dedicated to. I loved her while she was swimming, it was really fun to see her swim to either songs or poetry and how that propelled her forward.
Her relationship with AJ was just perfection, I will discuss that in a bit.
Of course Sam’s life isn’t the easiest, and while you can see her grow and make a progress, there are things happening that will cause her to fall back again. But Sam is a very strong girl and with the help of Sue (her wonderful, amazing psychiatrist) she forms plans and talks with her about (almost) everything. And it truly helps, I love that the author added these parts to the book, it gave extra dimension to the story. Showing that Sam is able to talk to someone about what goes on in her life. Someone who understands her, and someone who will also do anything (as evidenced from the latter parts) for her. Even outside of the office.
I loved Sam and her poems, they were gorgeous, but also so heartbreaking. Some were a bit happier, but in general they really tugged my heartstrings. It was amazing. I am normally not a big poetry fan, but I loved the poems in this book.
Phew, I am sure that I haven’t gotten everything that I love about Sam, but I think this says enough about my love for that character, how she made me feel, and how I wish I could just cheer her up when she is having a bad day.

AJ, ah, sweet and dear AJ. At first I didn’t like him, but then we find out what past Sam and he had. That one shocked me quite a bit, I didn’t expect Sam to be one of those girls. Sure she was with the popular posse, but I didn’t expect her to stoop so low. I won’t say what she did, read the book to find out.
I was just delighted when forgiveness happened and when Sam and AJ moved closer and closer. AJ is a great character when you truly get to see him. When you see him making the music, when you see him heartbroken, and I loved him and how he was with Sam. Always trying to help her out, always there for her, always silencing her churning thoughts. Not every guy would understand it, but he can spot that Sam is overthinking things again and he will help her out, kissing her or holding her tight. And when some stuff happened near the end (again no spoilers) he was still there for her, even when she was avoiding him. Of course he was shocked at first (which is logical), but soon after that he would try to be there for Sam, try to talk to her. It was amazing. He saw that, and he didn’t run away, like so many others would have done. Seriously, that guy is amazing.

Then we have a whole slew of other characters. We have Sydney, whose food poetry is amazing and also super fun. Emily who is losing her mom due to cancer, and we have several other characters, they kind of fade away to the background, but they are still around and support Sam.

I didn’t particularly like the Crazy Eights. Well I did like Hailey, she was the only one who seemed nice, the others seemed a bit too bitchy and too stereotypical popular mean girls. It was a shame, I could see why they were together, once they were great friends, but when we get in the book, I just saw that the relationship they have isn’t healthy. You should be free to wear what you want, say what you want, not to have it controlled by others, or being worried you might get kicked out if you do something wrong. You should never feel threatened by your friends. Knowing that if you get out of the group you might be shunned, that they will start rumours. That isn’t friendship, that is just toxic. And it is a topic that keeps coming up during the book. We see what it does with Sam, we see what she tries to do about things. I was worried that it might end up badly, so I am delighted with how the author dealt with it near the ending. That was just perfection, good job!

Caroline, my favourite character next to Sam and AJ. I loved her and how she was always there for Sam. I loved how she motivated Sam, how she listened to Sam, how she helped out.
Now this part I will put under spoiler tags, normally I try to keep my reviews spoiler free, but I JUST have to talk about this. So be warned, only read if you read the book. This is a huge twist, so really, don’t read it until you read the book!!!!!!!!!


Back to the happier things. Let’s talk about AJ and Sam. I just have to discuss it, and since I am not entirely sure it is spoilers or not, I will just hide them under spoilers to be sure.


Like I said the poems were amazing, I am really normally not such a poet fanatic, but the poems that get recited in this one? They were beautiful, broke my heart and at times hit close to home for me. And I just have to share one part of a poem with you all.
You’re still here
stitched into me, like threads in a
sweater.

Feeding me words
that break down and piece me
back together, all at once

Truly this book is the best one I ever read about mental illnesses (and I read quite a few books about them), maybe one day I will meet another book that is as amazing about this topic as this one, but for now I will have to give this book its #1 crown that it so deserves.

I would highly, really highly recommend this book to everyone. You all need to read this. You will be amazed at the beauty that this book is. Read it!