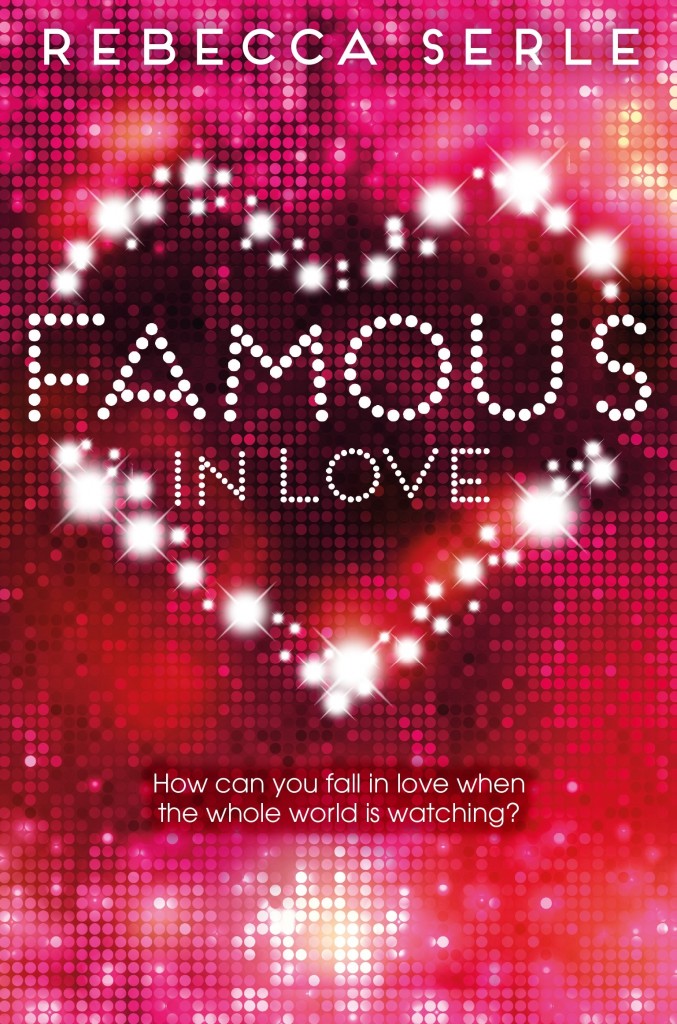 I do love a book about Hollywood, about movies, about celebrities. But I dislike a book with a Love Triangle, especially one that is done as this one was.

If I had known this had a love triangle I might have done some more research before getting this one. While the rest of the book really made up for the love triangle, the romance was just shitty at best.

But that will be discussed later in the review. Let’s just start with the good stuff and lets talk about the characters, because there is a lot of good stuff in this book and outside of it. I just love the cover, you can’t see it on goodreads, but a lot of those flecks of red are actually glittery. It is really beautiful.

Now, for the inside of the book. Our main character is Paige, her dream is to act (movie/stage) and she gets her chance when she is picked out of thousands of girls to play the lead in the most anticipated movie of all times, a movie based on a book that is super popular with everyone. I really loved Paige and her acting, while I have no acting experience (or at least not as big as our Paige), I could understand why she was nervous, why she was locked up in her head so much. The role she has to play, the weight of the popularity the movie and the books have, it all comes on to her, and this is her first huge role, it is all new to her. The screaming (I hated Wyatt), the stress, the make-up and hair sessions, everything is new to her. She is all learning and it was great to see her grow in this book, to see her get better at things, to see how she got more and more famous with each passing day or week. How she went from shy, silent girl and unknown, to a super star (even though she still is saying she isn’t that) with who people would want to take pictures, people want to see her, people are actually excited for her. And of course I loved how real she stayed, how she didn’t let it get to her head, how she was actually continually shocked that people knew her, wanted to see her, wanted her autograph and more.
There was one thing I didn’t like, and I will also discuss this later on, and that was her indecisiveness. She just couldn’t decide, not only between boys, but also with other things. Her friends do this and that? Let’s just make it awkward and decide to just not communicate any more, let’s just run away. sighs Though I can somehow imagine why, it was quite a shock, and her friends also decided to just not tell her. Nice friends she has. Real nice.

Her family seemed a bit weird, at times I didn’t like them, they didn’t seem to support Paige, they seemed to mostly make fun of her dreams, and if there is one thing I dislike is it when families do this to one of their own. I can imagine you might not always support a dream (for instance if it is a dangerous one), but other than that, I think that families should at least be there for each other. Luckily, the last part really gave a nice insight in the family and I started to like them a bit more.

Paige’s friends. Cassandra was decent, but I didn’t see why anyone would like Jake. He seemed pretentious, weird and a bit too much in trying to push people to do this and that.

Wyatt, the most annoying and for me the one I disliked the most. I can somewhere imagine why he acts like an asshole, but I still don’t approve of it. We have all seen what it did to Paige, how much stress and worries it gave her, how frightened she was of the guy. That is not a healthy relationship. Sure, he had one or two moments that he redeemed himself a bit, but sorry, for most of the book I disliked the guy a whole lot.

Rainer, I am still not entirely sure what to think of him. He was a great guy at times, he really helped out Paige with all kinds of stuff. Like talking to Wyatt for her, defending her when she couldn’t take it any longer, going with her on trips. But I also found him a bit too pushy. A bit too touchy-feely. I am also not sure if she fell in love with him, or is crushing on him the way she does with Jordan. It just feels like she just slid into it, like it was natural to just fall in love with Rainer. She works with him, he is so kind, cute and friendly. I never really felt the spark between them. Like I said, it felt forced, it felt weird. They come across as just friends, or even sister/brother, so it is really awkward to see them kiss and be romantic.
Considering his past, I can imagine he might be a bit aggressive and weird about things, but I still didn’t approve of it.
Later on we find out some stuff, why he is so aggressive towards Jordan, why he and Jordan are in some kind of war. But we also learn the true story, and that changes a lot for me. It changes how I look at Jordan, it changes how I look at Rainer.

Jordan, ah Jordan. My favourite character, though I didn’t like how he flirted and acted around Paige. He knew she was with Rainer, or that Rainer had an interest in her, yet he did all that.
But, I do have to admit he was a great character, at first he was broody and moody, but later I saw a different Jordan, a Jordan who was just misunderstood, had a crap childhood, who was just trying to get through things. His spark with Paige, wow, just wow. It was just amazing and I loved them together. But yeah, it was bad, Paige was technically with Rainer, and so while I wanted to enjoy the spark, the attraction, I knew I couldn’t. I just was frustrated. I was just angry. This is how it was meant to be, these two have to be together, and I can’t enjoy it!

And that brings me back to the Love Triangle, it is one of my most hated tropes, and I have dropped books for them, or just didn’t start them. Love triangles make me frustrated, not only with the girl who is often the one who is the indecisive bitch, but also with the guys for not backing away, for not saying no.
And that was the problem her. Rainer was the guy Paige was with, but she developed feelings for Jordan. Feelings that felt more real to me (and also her, considering all that happens) than feelings of Paige with Rainer.
Paige is constantly flitting from one of the guys to the other, and I just wanted to smack her, shake her, and get her to decide. Not the one most convenient, not the one because of the whole shitty history between Jordan and Rainer, but picking the one she truly wants. Even if that meant hurting one of the guys, because you know, now she just hurts them both, by being with one, but flirting and longing for another guy. And don’t tell me that the guys won’t notice. Believe me, they notice it when the one they love is looking with special eyes at another guy.
I also feel that it was added because of the whole book/movie thing that they are all in. That one also features a Love Triangle, and wouldn’t it be awfully convenient to have one in her as well?

But the movie part, the whole Hawaii setting was gorgeous and I love how the author described these to us, it just felt like I was there, I could see the clear blue ocean, I could see the sunset, I enjoyed food from that Fishmarket. I was there at the set, trying to cheer and help out with the movie. It was just delightful. The world setting was really written well.

The first half of the book was fantastic, but as the Love Triangle progressed I just got steadily more and more annoyed with it all. I flew through the first part, it was a short time, but the later part took me several hours. Several times I contemplated putting it down and starting another book, but I wanted to see if she would make a decision. I won’t spoil anything, but believe me, I will be reading the second book. Even with the Love Triangle and what happened in the end, but I also want to see Paige act again, I want to see her make movies again. Because I really liked that Paige.

All in all, I would still recommend this book, but be warned for the Love Triangle of Doom. And me? I will be reading that novella that is also in this series. I love the movie and the book from this book and I want to know more about it. I want to see if the romance is truly that good or if it just as annoying as it is in here. Since it is still a Love Triangle. Hopefully though it is a better one than this one was.

3 thoughts on “Review for Famous in Love”