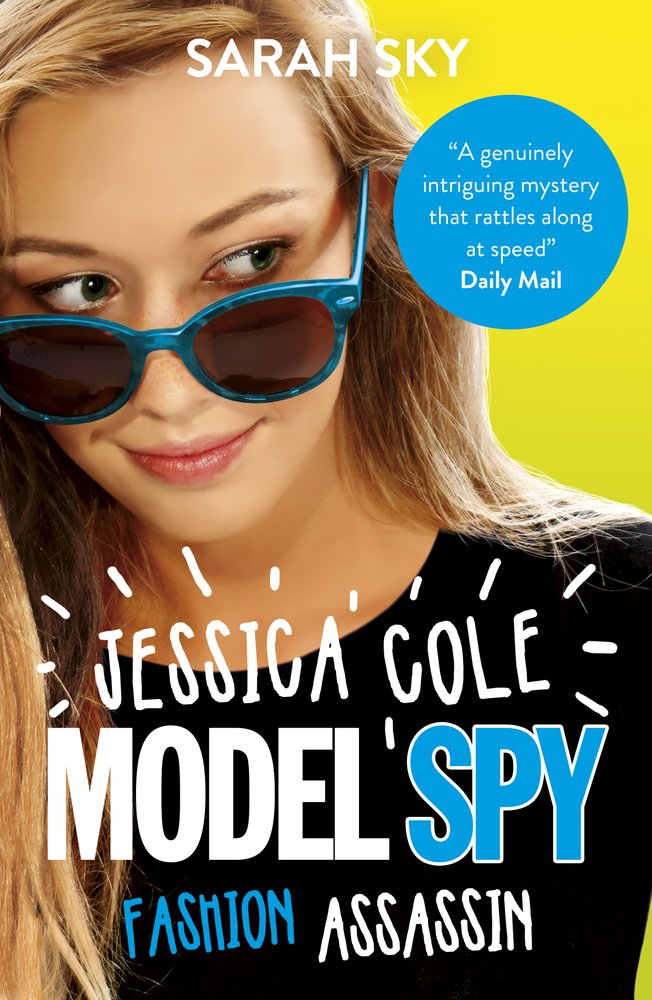 The second book in this model/spy book. Sadly this one didn’t have a lot of modelling, it was mostly spying and bodyguarding. Which is ok, but I was hoping that it would be a nice balance of modelling/spying again, like with the last book.

Jessica is back in this new book, this time she is going to bodyguard a very rich and spoiled brat named Kat, who is also a fellow model. Next to that job we still have Margaret and her dangerous stuff, then we have Vectra and also Allegra, Jessica’s dad who is still in the hospital and several other things. I do have to be honest and say that at times it was just too much. Sure, most of it is connected, but I have to say that at times I just lost the thread of the story and I had to retrace to check what I just read. At times I was also a bit bored since the story didn’t seem to go anywhere but run around in loops. If I have to say it even easier, the first half was a part that I just raced through (still being confused at times though), but the latter half took me quite a few hours and at times I was just checking the page numbers to see if I was near the end or not.
Don’t get me wrong, the book is good, but there was just too much, and it took too long. And also, it was just silly to see how people manage to escape or how stuff suddenly took a twist for something different. I was just rolling my eyes.

We also have a new character named Kat, and dear Lord what a piece of poop that girl is. I hated her from the beginning, and while at times I liked her, that like was instantly destroyed when we find out she lied. Maybe if she had a normal family and wasn’t spoiled to death by her dad, maybe she would have turned out to be different. But for now? I am worried that we will see more of her, but as long as it isn’t a role that is as big as it is in here, then I will be happy.

Jessica was really great in this one, I am still amazed that she can juggle being a model and a spy. Both are jobs that will eat a lot of time, and that both require a person to be on time. Jessica is also smart (though at times I already saw it coming and the hints were there and it took Jessica ages to figure it out). I loved how dedicated she is to her dad and her grandmother. But I didn’t like how she overreacted when she saw that and immediately distrusted her friends. Bleh, if you had any trust you would know what it is, and you would also just be more reasonable. Nooo, instead this whole thing just continues throughout the whole book, being enormously annoying.
I loved how Jessica was kick-ass, making good use of what her dad taught her, and also the gadgets she got. She truly went through some life threatening situations but she managed just fine in all of them. She is turning out to be a great asset for MI6. 🙂
And luckily in this one she didn’t jump to conclusions as much as she did in the last book. Thank Lord.
I also hope for her that her modelling will pick up again, she is amazing and I would love some more modelling work in the future as that is a big reason why I picked up the books.
I will also stick to my: I still don’t believe she is 14 years old. Like I said in the review for the first book, she seems too mature and too different from most 14-year olds, I would still say she is more like 16 or 17.

I was also happy to see that person back in the books, I was worried about them, worried that they wouldn’t return, so imagine my delight when they popped up.

I loved that it took place in Monaco, and while most of the book took place on a yacht, it was still a fun setting, nice and exotic. I hope Jessica will return to Monaco one day again and that we will see more of this city/micro-state.

I loved the gadgets and I would love to have them and use them. Though I am not a spy, so I might just use them for the sake of fun. 🙂 Laser-cutting my vegetables while cooking, or taking a dive and using that necklace. I was a bit sad though that she so easily tossed away her mom’s necklace in favour of the new one. Sure, that one won’t save lives, but it still felt odd that she so easily parted with it and after that we never hear about it again. Oh well.
Hopefully the next book will bring some new gadgets.

All in all, while I did like/love this book, there were just a few things that I didn’t like and that is why I can’t give it higher than a 4 stars.