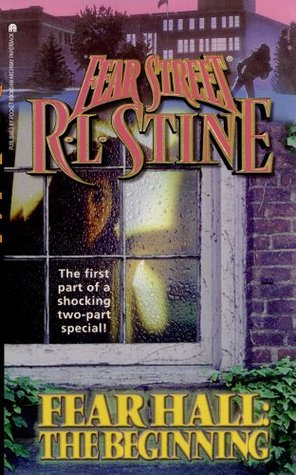 Meh, if I had known it would have such a cliffhanger I wouldn’t have read it.

This book was difficult to find, and I can’t find the second book at all. I guess I will never find out the truth. Yes, even though stuff is revealed (things I already suspected from the beginning and around chapter 15 started seeing more clearly), there is still a chance that R.L. Stine will make something up, will get a nice twist and do something. Bleh, bleh bleh. Hopefully one day I will find the second book. And yes, I knew there is a second book, I just didn’t think it was this necessary to read them in one go. Quite often you can read one and then calmly read the next book later.

The book also wasn’t what I was expecting. I expected a horror story with the Fear Hall as main stage. While stuff does happen on there, and while the book was exciting, it still felt a bit empty. It was mostly about Hope/Angel/Eden/Jasmine and Darryl and what is up with them. There are also murders. But again, I was hoping for a really spooky tale about the Fear Hall. Like ghosts, or monsters.

I won’t chat much about the characters due to the huge amount of spoilers that might give. I can just say they were all interesting and intriguing.

But, as I said, the book was exciting, it was great fun to try and figure out what happened, and what will happen. I loved the mystery surrounding the girls and Darryl. Though, again, I saw it coming. The ending brought everything together and made sure we really knew what was going on.

The murders were truly gruesome and bit overkill. I guess it fits with R.L. Stine, he likes to kill of his characters is gruesome fashion.

I also was a bit confused at first. There is also a series named Nightmare Hall, and I was thinking this was just a companion story or some other story that had to do with that series. It turns out it doesn’t, even though the similarities are abundant.

All in all, I wouldn’t recommend this one, well… unless you can find the second book immediately and read it quickly after finishing this one. Otherwise, I would suggest you stay away. Since this book has no ending, it just gives us a (seen-it-coming)twist and an open ending. 🙁 It is still a terrific book, good story, good characters, but if you can’t find the second book, then you will just be frustrated (like me).