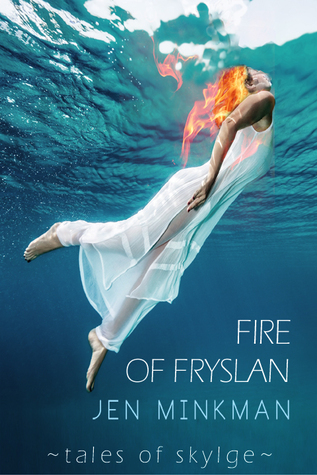 I received this book from the author in exchange of an honest review!

The last book in this epic trilogy, I am sad to see it go, another series is finished and I can just hope that Jen Minkman will be writing more awesome trilogies in the future.

The plan was to read some other books first, but this book just pushed and pulled at me, it wanted to be read, so I decided to read it, and am I glad I did.

The main characters this time are Melinda (yay!) and Dani. It took me some time to find out who Dani was again, she was mentioned in the other books, but mostly had a small supporting role, so I totally forgot about the girl. But now she had a chance to shine, and my oh my, she is such an interesting character. I also love her full name. It fits her. I felt sorry for her, for her love for Sytse (and we can all see from the start point that Sytse’s mind is on something entirely different), for feeling so hopeless at times. But, while she struggles with her feelings, at times she is afraid, she still kicks ass and will do anything for her friends, anything to help people out.

Melinda, I loved her in the previous book, and I still love her in here. She made a mistake, a mistake that she regrets deeply, but she is doing anything to make it right again, to make sure that she can see her friend again, even though she knows her feelings aren’t returned, not in the way she wants. It must be so difficult, to see your best friend, your lover, with someone else. I loved how she risks everything to make things right, to help out the rebel forces. To make sure the world will be ok again.

Because all hell is breaking loose in this book. It is truly Edison (the evilness) against Tesla (the one who will save us). I really like that they are pitted against each other like this. Of course at times I was snickering, because it still sounds a bit silly. Two inventors and one big war between them. One corrupt and a pervert, the other trying to help out people.
Of course, it is not only about Edison vs Tesla, but we also have the Nixen/Sirens. They still instil fear in the hearts of people, especially now that the light is gone. They are not attacking, but will they be attacking soon? What will they do? Because that icky Edison still has one of them. It was amazing to see what happened near the end, and while not really the best way to handle things, I still enjoyed it and I was happy that we could close this story/chapter.

I loved the new description of the Sirens. I was already wondering about the cover, but with that description, it explains it all.

I almost cried when that happened to Tjalling. 🙁 Almost everyone (well with exception of one other person) got a happy ending, or at least their stuff was resolved, but Tjalling. Poor guy. He didn’t deserve this. 🙁

Wow, that ending was amazing! I just cried when that happened. snifflesThat was fantastic, beautiful and oh so perfect. I am so happy for those two characters, and of course for that new character that caused this beautiful reunion. They deserve this so much.
And then that happens between 2 characters and I was just tearing up some more. So much tears, so beautiful. sniffles some more
The ending, wow, wow and wow. It was a fantastic ending to a fantastic series.

I also have to give points to the amazing cover. I just love it! A girl, swimming in the sea/ocean, with flaming hair. Amazing!

I would highly recommend this series to everyone else!