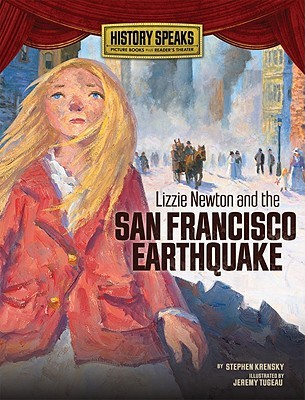 An educational picture book that tells about the San Francisco Earthquake of 1906 and what happened there.

Lizzie was an interesting character, but at times I found her foolish or unrealistic. But she was also brave to go to her parents house on her own and also trying to help out people on the way to her house. During the time she helps out people she learns a heartbreaking lesson that is bound to follow her for her life.

The story has quite a few facts, but shies away from the gruesomeness that was that day in history. Which isn’t bad, as this is still a children’s book, and I can imagine that this is already a bit scary, no need to add dead or dying people to the book as well.

After all the illustrations we also have a small history lesson with some photographs and last (though something I didn’t care about) a theatre play/performance. I haven’t read that part, I already read the book, I didn’t feel the need to read it again but this time in script form.

The ending, while of course sad, was also happy. At least for Lizzie and her parents. I really did like what Lizzie’s parents did for the community.

The illustrations were really pretty, but not always good (figures looking distorted). But in general the author did well to capture the emotions that the characters had and also shows us the destruction that happened in the city.