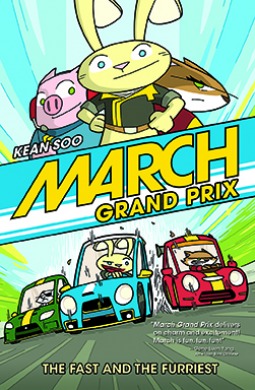 Received this book from Netgalley/the publisher in exchange of an honest review.

This book looked really fun, and it was mostly fun, though I have to say I loved the first story the most, the second was a disappointment and the third was quite fun (but had some annoying parts).

Let me start with March, a rabbit/hare/bunny who likes racing and who does this often as his job. No clue why he is still with his parents though, as I would think he is old enough to live on his own. Oh well, March is a great character and I loved how he tried to help others, how he just kept going even though things didn’t always look like they could go well. However, in the second book I didn’t particularly like him. Mostly because I would expect someone who races would understand how dangerous it is to race in a town with multiple people. Instead he drifts and races like crazy and I was just waiting for people to get hurt. He destroyed quite a bit of stuff. Which is a shame, I really had expected better from him. While he needed some motivation, he helped out people in the last book. And I was proud of him, though at times I was shaking my head and wondered how he kept gaining in on that first place girl. After all, he lost quite a lot of minutes (maybe even hours, since one car had to be fixed).  But all in all, he was a good character and I really liked him.

March’s family is great, they are really supportive and try to help him out as best as they can. I really liked the part when they all fixed the car, everyone had a part, even his little sister who painted her paw prints on the car. 🙂

Hammond (or Pork-chops or sausage links) was mostly an annoying character. For various reasons. He was also an awesome mechanic, but sadly also a big idiot and I didn’t always like his attitude. I also didn’t like how he ate a lot of the pies that were meant for a customer. Does he not have common sense/does he not know?

I really liked the races, it was one of the reasons why I wanted to read the book. I really liked races and fast cars, so this book was really fun. They had diagrams of the cars with all kinds of specs, they drifted through the corners and so much more! It was great fun.

I loved the puns in this book. There were so many. Like the fact that March’s favourite racer was a turtle and there were quite a few other parts that had me laughing at the little word jokes.

And that brings me to the last part to discuss, the illustrations. I really liked them, this is my first book by this author/artist and I must say I like the style. It is really colourful and fun.

All in all, I would recommend this book to everyone. People who like races, puns, cars and hilarious situations will like this one.