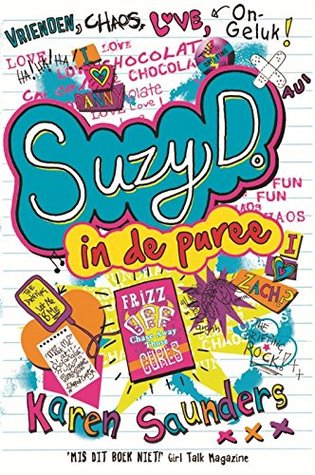 4.5 stars. Note: I read this book in Dutch, but I want to write an English review so everyone knows what I thought of this book.

Suzy is a great character, she is silly, hilarious and at times so dramatic, making a bigger deal then things are supposed to be. She has a big family. She has 2 sisters (one older and one very young), parents, and since her sister is marrying her boyfriend often pops up as well. Often she wishes for more quiet en peace, and at times she wishes that her little sister would stop bugging her and stop stealing her phone. But she also loves her family, you can clearly see that. She doesn’t always show it, at times she is grumpy (but that fits with her age, and also with the fact that anyone would go crazy with all the wedding frenzy going on).
She has a wonderful boyfriend named Danny, with whom she has been together for a long time. A big chunk of the book is about her feelings for Danny, she is confused by them. On the one hand she likes Danny, but on the other hand she can’t help but noticing things that she wishes were different. Things like that he doesn’t show affection in public, that it often feels that he doesn’t care about her or what she does and there are also a few other things.
At times this dilemma got a bit annoying and at times I just wanted to shake her. Tell her she is still young, she still has all the time of her life to figure out stuff. That she won’t be stuck for life to one guy, unless of course she will love him even through high school and afterwards.
I can also imagine that she was confused with her feelings for Jack. He is quite handsome (though that is his only good quality, more on that later).
I wish she had been more honest and didn’t feel the need for taking revenge on Danny with Jack.
Suzy really has a busy life and I just laughed at a lot of parts, and just wanted to cheer her up in other parts.

Then we have Mirthe, Suzy’s best friend. I did like her, I loved how protective she was over Suzy, and how she tried her best to help her best friend when things went to hell. But she also has to pick sides now that that happened with Suzy and Danny. Danny is still her boyfriend’s best friend, and she has to pick between them, and that didn’t always go OK.
I loved how she could just rant forever about clothes and I just had a big laugh when Suzy just took her clothes to Mirthe so they could share. Why would I laugh for that? Well, read the book and I guarantee you will laugh and shake your head as well. 🙂

Danny, I have to be honest and say that I didn’t see why Suzy and him were together. I just didn’t see a spark. They seemed great friends, but that is actually all I could see. Maybe if he was a bit more affectionate, and maybe a little less happy to see Suzy’s little siter, maybe if he would just get all the hints that Suzy wants a bit more, maybe then I would have liked him. For now, not that much. Later on though, especially the last part? Yes, I started liking him there. He became much more open and way cuter.

Harry, one of the worst characters in this book. Even worse than Janine. I hated how she did all those tricks. Tricks are fun at times, but if someone says no, don’t continue, don’t do all that. It is not funny and I hated how the parents just blatantly choose to pick her side and not listen to anyone else. I am sure that is also why Harry became this monster that she is today. Spoiled rotten, getting a lot of attention, parents who just don’t care, yeah, that is a good idea. I wish she would have gotten some sort of punishment and that the parents would have listened to Suzy for once.
Her obsession with Suzy’s boyfriend was also creepy, just like the fact that she likes to steal her sister’s phone to message/call him. Maybe she has a brother-complex, but it still felt weird.

Janine was the second worst character, together with Jack. Dear Lord, those two are just your typical popular guy/girl bullying/teasing other people because they are (according to themselves) so perfect and everyone else is a loser. The last part of the book only made me dislike them even more. It was just sad that they would go this far to do stuff.

The story is really fun, and while at times hilarious, it is at times also really real. Suzy is really starting to become a teenager and with that she has enough problems. Her constant battle with hair and pimples, with feelings for boys, her arguments with her parents and much much more.

The wedding was really fun and I just had to laugh so loud when Amber and Mark made that announcement. 🙂

All in all, I am delighted with this book, and I just bought this one and also the second book in English. Can’t wait to read them in English and see what is changed, I guess a lot, since translators here like to Dutchify all the books. :\ Some changes I can understand, but most of them? Not really. With a lot of things being so global, I don’t see the reason to make something totally Dutch in each and every way.

But all in all, I would highly recommend this book to everyone!