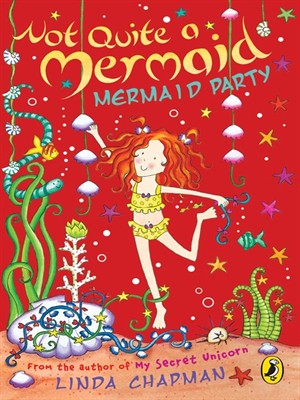 After two heartbreaking books I just needed something light and fluffy and I found that in this book.

This book was really cute, though I was a bit confused. We do get some explanation about Electra, why she has legs instead of a tail, and older events are told in short, but it just felt like I missed something big. Since there were no numbers in this series, I thought I could easily read them in any order, but maybe you just need to find and read the first book that is written instead. 🙂

Electra was cute, but also at times a bit annoying. I could understand her need to help out (partly because she wanted to help, partly because she wanted that crown), and to do good, but she should also have seen that she was doing it a bit too much. I felt sorry for her when the adults got angry at her (though they had a good reason, but still, I think they should just have listened to her instead, she had no bad intentions after all). She is also very brave, and I think it is really interesting to have a mermaid like her. Instead of a tail she has legs, which is very interesting and gives the story something extra.

I loved that she had a friend named Splash who also was a dolphin. Though a bit stereotypical (a lot of mermaid stories have the mermaids have some kind of special sea animal as a friend), I still liked it. Maybe it is because I love dolphins, or because I could see that Electra and Splash were really good friends.

The ending and what happened there, it was fun, but it could have all been prevented if people had listened to Electra, but then again, I guess if this hadn’t happened then Electra wouldn’t have gotten that one thing.
I just have to remember that this is a children’s book and that they often have these silly plots and over-the-top endings with stereotypical things happening. One thing that does seem odd is that sharks pose such a danger, why aren’t these people armed or use their magic? Or why do they not have good security? It seems kind of silly that they are absolutely hopeless in situations that must happen more often when one lives in the sea.

There are also illustrations scattered throughout the book and it made the story even more fun. We could see Electra being bored, we could see the evil sharks, we saw other mermaids/merman, we saw her family, and it was all great fun.

Would I recommend this one? Yes, it is a fun book, but be warned, the plot is quite a bit silly and you might be a bit confused.

2 thoughts on “Review for Mermaid Party”