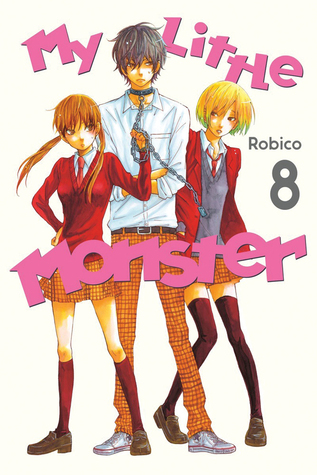 This volume brings us a new character, Iyo, a very highly annoying girl, but I will talk about it later on. There are also some confessions, and Haru and Shizuku finally move to relationship status (though, while I was cheering and fangirling, I was also wondering, weren’t they already kind of like boyfriend/girlfriend with how they acted around each other, the small hugs and kisses, the likes/loves?).

I am also gradually getting a bit frustrated at Shizuku, she is so oblivious to so many things, and it is getting slightly annoying. I know you mean well girl, but you don’t tell someone you held their birthday because you had nothing better to do. That is just rude, mean and not nice. I also didn’t like the present she gave to Haru. I can imagine that for her it seemed the perfect gift, but that is not something you should give to people.
She still is studying to death, something that was admirable in the first books, but by now is getting old and I just want to shake her up and say that she can do something fun for a change.
I also wish she would be more honest with Haru, she clearly wants to be kissed, clearly wants to be held, but she jumps away every time Haru comes near. I can imagine this happening when one is just starting to know each other, but by now? It just seems odd and weird. And also frustrating, as we only have a few volumes left. I am worrying the mangaka will hurry through this, and that we will get a rollercoaster ride of stuff happening.

Haru is still a great character, but I was frustrated at his behaviour. His stalking, the way he says/does things, how he gets angry, it just gets old. You can see him change, but you can also see him slip back into his old ways. At times I also doubt his IQ, with the way he acts? The way he is like a child? It just doesn’t fit him. And I just wish he would grow up. Come on guys, these characters are all 16 to 18, yet most of them behave like they are 12.

Iyo, urgh, why did she have to be added? She is the worst character in this whole series. I hated how she didn’t get a hint, how she tried to do that to Haru when he was asleep, how she is messing with Shizuku, how she talks. “Iyo is much prettier.” “I wonder if they like Iyo.” “If you like, Iyo will take you there.” Girl seriously, talking like that is cute on a 3-year old, but your age? No.
I hope she won’t get in the way of Haru and Shizuku, I hope she will just get out of the manga.

The story in this one was good, and it was fun to see our group in another setting again. This time the mountains.

The art was great and I still love it and how the characters look.

All in all, I really liked this volume, but due to some stuff, I won’t rate it higher than 4 stars.