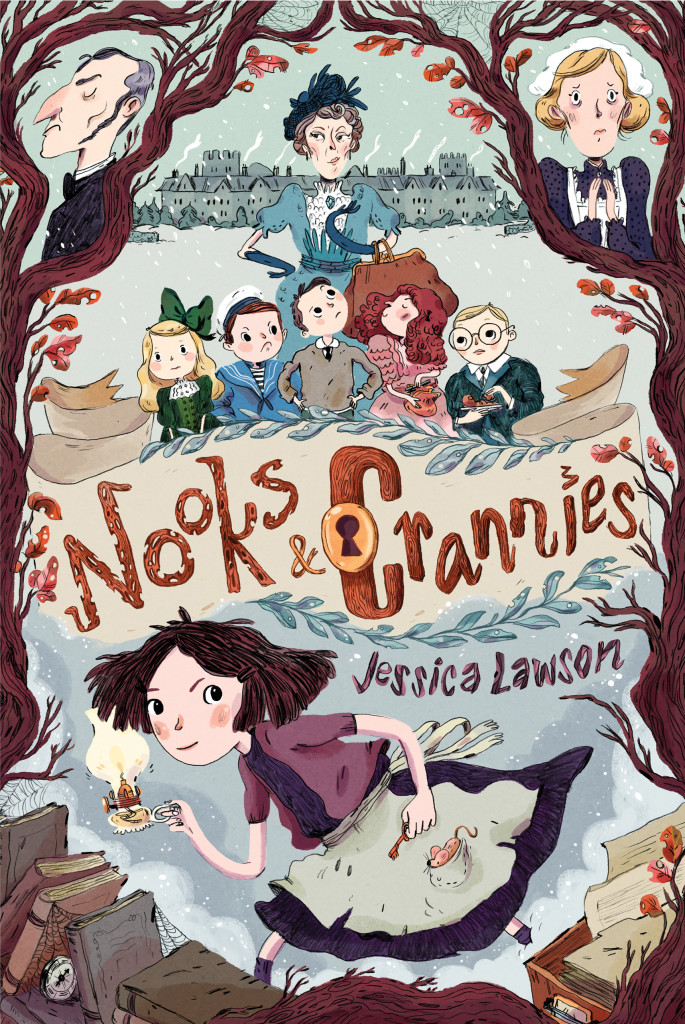 Due to the fact this book is easily spoiled, and I don’t want that, as this book was a delightful Middle Grade mystery, I will keep it mostly to the basic stuff, even though I would love to go further into things, I just don’t want to spoil anything! This book has some masterful twists and turns that will surprise you.

Let me start that I just was delighted with the story idea. It sounded a bit like Charlie and the Chocolate Factory, 6 children + parents being invited to a big mansion in the middle of nowhere, for what purpose, well they will have to find out. There is exquisite food, there are big rooms, hidden passages, mysteries and ghosts! It was all truly a feast to read this. The descriptions of the house was wonderful, I could just imagine myself there and discovering the passages, discovering all that is hidden in the house. Wandering around, getting lost in such a big place. I could also just imagine myself cuddling up in front of a fireplace and reading a book in the library. My, oh my, that library sounded absolutely divine.

Tabitha was a fantastic character, though I felt so sorry for her. She never deserved to have such parents as the Crums. Dear Lord, those people were horrific. I just wanted to shake them.
But even with horrendous parents like that, Tabitha was a great person. She learned to be brave, to be independent, but you can also see that she was often sad and alone, even though she had a great, but little companion with her at all times. But that great companion often cheered her up when she was in a dark place.
I really loved her conversations with that companion of hers, it was great fun to see her act like a detective, talking to her companion as if he were her colleague. I loved how that companion squeaked in reply or did actions to make it seem like he was replying.
I can hear you say: Squeak? But people don’t squeak? Well, I never said that her little companion was human, did I now? Her companion is a very adorable mouse, named Pemberley. She found him and his siblings in her attic (yes, the poor girl was dumped by the Crums in an attic), and he was the one who stayed. She taught him tricks and much more! The little guy had quite a personality, and I loved how fiercely protective he was of Tabitha.
I love mice (I had pet mice of my own when I was younger) and I was delighted to finally see a character having a mouse as a pet, as a companion, as a friend. So really a lot of plus points for this!
Tabitha was delightfully smart, observant and I loved how she could just recall stuff that she noticed days ago. Even the littlest details, nothing escapes Tabitha.

The mystery and the whole story? It was just wonderful, I was lost in the book and time just flew by. I am still unsure where the time just went to. One moment it was a certain time, and when I looked up again it was much later. The book really grabs you by the nostrils, pulls you in, and never lets you go until the end.
I also had a few parts that just made me tear up. Of course, I won’t spoil which ones.

We have several other characters. From the start I didn’t like Barnaby or Frances, but I did like the other characters and I was just hoping that Tabitha would find a friend in them, she deserves to have one.

One thing that seemed odd, though maybe it was just me. At one point in the story, at a dark spooky night, Tabitha puts a chair under her doorknob, yet the next morning the maid seemingly opens the door without trouble, nor are there any mentions of a chair falling over. It was a bit weird. Maybe I missed something, maybe it was all a dream, but it stood out a bit.

The ending was fantastic, quickly paced and the last page was really sweet and lovely.

The book also has several illustrations and I really loved them, though I wish there had been more of them.

I also really liked the Pensive parts that were added at the beginning of the chapters. It was a feast to read them, I would love to read those Pensive novels, too bad they only exist in this book world.

I would highly recommend this book to all. Are you looking for a delightful mystery with great characters and an epic story? Read this one!