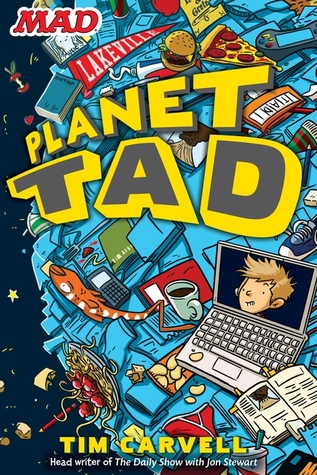 I am not entirely sure what to think of this book. At times it was pretty good, at times it was just bad or made my eyes roll so hard they almost popped out of my head.

I do like the format, the emoticons that tell us how Tad feels during that day, and I liked that he wrote something every day, even if it was just a short little part. Not many kids would keep it up like he did, most would just give up, or end up just doing a few days and forgetting to do it every day.

But while this is all nice, it does get a bit boring, and his reviews/thoughts on movies or games or books tend to get a bit bleh, and instead of laughing, I was just wondering how the hell he thought up those things, and why anyone would think this.

I also wondered about Tad’s intelligence, at times he seemed quite a bright boy, but sorry, at times I was seriously wondering if he was actually 12/13-years old, or if he was more like 7 or 8-years old. The stuff he says or does, he wasn’t always nice to his sister (though I have to say he was honest about stuff).

The book is also just another one in the category: Boy or girl aged 11 to 14 decides to write diary, telling us about everything that happens there, about girls or boys, about games/movies. Typically for that kind of book it also has illustrations. It seems there is quite a market for these kind of books as there are quite a few out there and I keep seeing new books popping up with the same formula. Maybe I am just getting a bit bored with this kind of book, maybe I have my belly full with the same kind of formula. I also don’t like how the main characters generally think they are dorks/losers. And sure, they aren’t popular or anything, but it isn’t bad to be a dork or nerd, and you don’t need to feel like a loser or like you need to impress someone, just enjoy your time in school with the friends you have.

I didn’t entirely like the parents (didn’t like how they bribed their way through stuff) or Sophie (the sister, who was (typically) highly annoying).

The illustrations were really nice, I do like them and they added something extra to the story, at times it also got more funny because of them.

Would I recommend this book? Only if you are not full yet about this kind of subject, and don’t mind lame humour or stupidity, then try this book out.